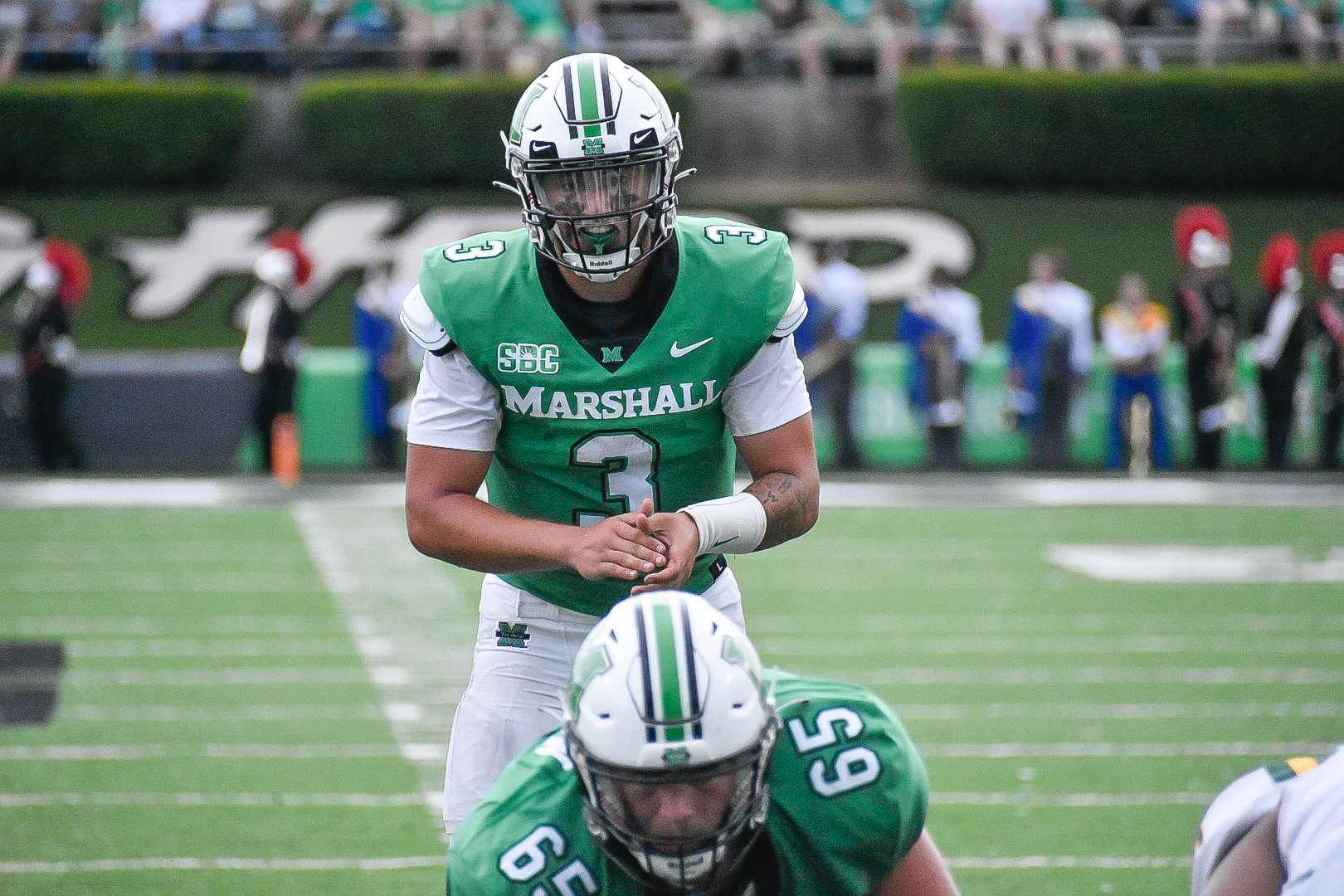 Henry Colombi and Marshall play at No. 8 Notre Dame for their first road game this season. Photo by Angie Shockley

HUNTINGTON, W.Va. — Marshall doesn’t get many chances to make a national statement, but it gets an opportunity Saturday when the Herd takes on 8th-ranked Notre Dame in a 2:30 p.m. that airs on NBC.

The trip to Notre Dame Stadium, one of college football’s most iconic venues, has been circled on the calendars of Marshall fans for about three years, but Herd head coach Charles Huff says his group is trying not to put extra emphasis on the contest.

“It’s a huge game for our fans, but we approach this like any other game,” Huff said. “We have to throw our best pitch and see if it’s good enough. Hopefully it is and we’ll make strides to help us the rest of the season.”

Ohio State’s improved defense held the Irish offense to 253 yards and 12 first downs, while shutting out the Irish during the second half in Columbus. First-year starting quarterback Tyler Buchner threw for 177 yards, but Notre Dame could only net 76 yards on the ground, led by Chris Tyree’s 28 yards.

Freeman is wary of a Marshall team that could present problems.

“They’re a good opponent, they’ll be motivated and it will be a challenge for us to get over the Ohio State loss,” Freeman said. “We have to prepare in the right way.”

This is Marshall’s first matchup against a Top 10 opponent since 2016 when quarterback Lamar Jackson led then-No. 3 Louisville to a 59-28 win at Joan C. Edwards Stadium. Marshall is 1-9 all-time games against Top 10 opponents, the lone victory coming back in 2003 at then-No. 6 Kansas State.

Saturday marks the first meeting between the Herd and Irish.

TIES BETWEEN THE TWO SCHOOLS: Notre Dame tight ends coach Gerad Parker is a former Marshall assistant, serving as the Herd’s wide receivers coach under Doc Holliday in 2011 and 2012. Parker also was an assistant at West Virginia as recently as last season. Parker’s sister, Alicia Parker Webb, is the Associate Director of Development for Endowments and Major Gifts for Marshall’s Big Green Scholarship Foundation  Former Marshall offensive lineman Trevor Mendelson is on the Notre Dame coaching staff, serving as a Senior Offensive Analyst. Mendelson payed for Marshall from 2011-2014 and was a starter for the 2014 Conference USA championship team.