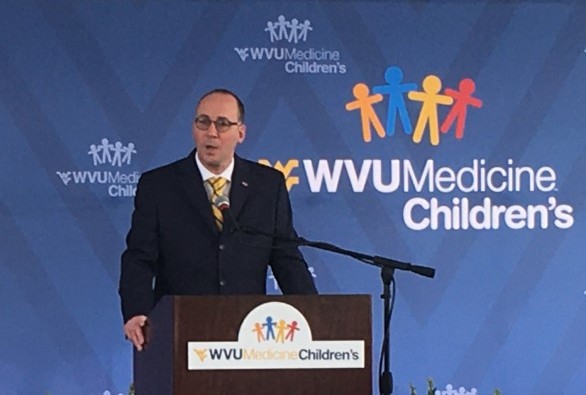 Health care workers are transferring more than 100 young patients of Ruby Memorial Hospital to the new children’s hospital. The new 150-bed facility is one of 25 pediatric hospitals in the country attached to a larger academic medical center.

The hospital started accepting patients less than a week after a formal ribbon-cutting ceremony.

“Each child got essentially what we call a passport or a flight plan,” Albert Wright, WVU Health Systems’ president and CEO, said regarding the transfer process.

“This is where you’re at now, this what time you’re leaving, this is where it’s going to take you, and this is the room you’re going to.”

The new WVU Medicine Children’s Hospital is being billed as a one-stop, fully comprehensive children’s hospital that can serve West Virginia children. The ten-story, $215 million facility includes separate areas for maternal care and pediatric heart services, as well as intensive care units for cardiac and neonatal patients. Separate birthing centers and individual floors for patients and their families are also going to be in the hospital to allow any West Virginia resident to have care available.

“Not only are we moving patients today and admitting new patients, but we have five operating rooms in that new hospital today,” Wright said Thursday. “We have clinics running and the MRIs, so this is a comprehensive hospital.”

When the transfer of patients started for WVU Medicine Children’s Hospital at 5:30 a.m. Thursday, patients entered a facility with an atmosphere completely different from other children’s hospitals in West Virginia.

“We needed to do as much as we could to create positive distractions for children and their siblings and their families and make it as comfortable for families as we could,” Wright said.

Fundraising support for the children’s hospital began in 2017 with contributions from the West Virginia University Foundation, various corporate partners and WVU alumni like former WVU quarterback Jeff Hostetler, who also helped raise more than $60 million as part of the Grow Children campaign.

For Wright and WVU Health System, the community spirit to help those in need is reflected in the provided services and care.

“The amount of people, the teams, the architects, construction engineers, the designers, all of our caregivers, this is a hospital that’s open and this is a once-in-a-lifetime opportunity for everyone involved in this,” he said.

News
Marion County Holbert Road rockfall project set for spring completion
Switch of single-lane coming soon.
By Mike Nolting
News
Political expert says the 2024 run for the U.S. Senate in West Virginia could determine the futures of many
The U. S. Senate seat currently held by Democrat Joe Manchin could set the field for other races.
By Mike Nolting
News
Family of 4 injured, 2 dogs dead after car goes over interstate wall in Charleston
It happened at the I-77/I-64 split Sunday morning.
By MetroNews Staff
News
Education focus groups to be held statewide by AFT-WV, WVEA
First listening session to be held in Morgantown this Tuesday.
By Carrie Hodousek