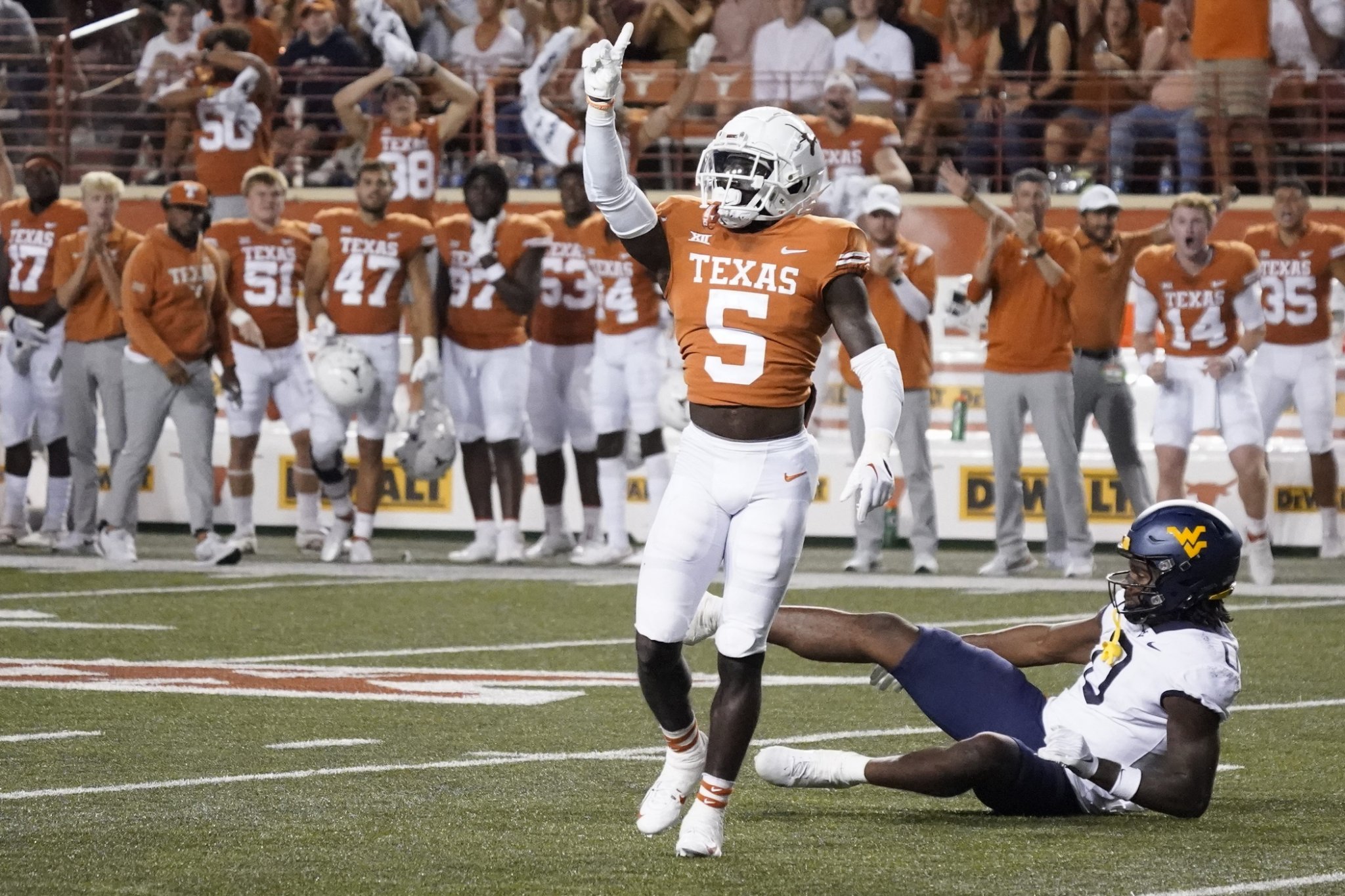 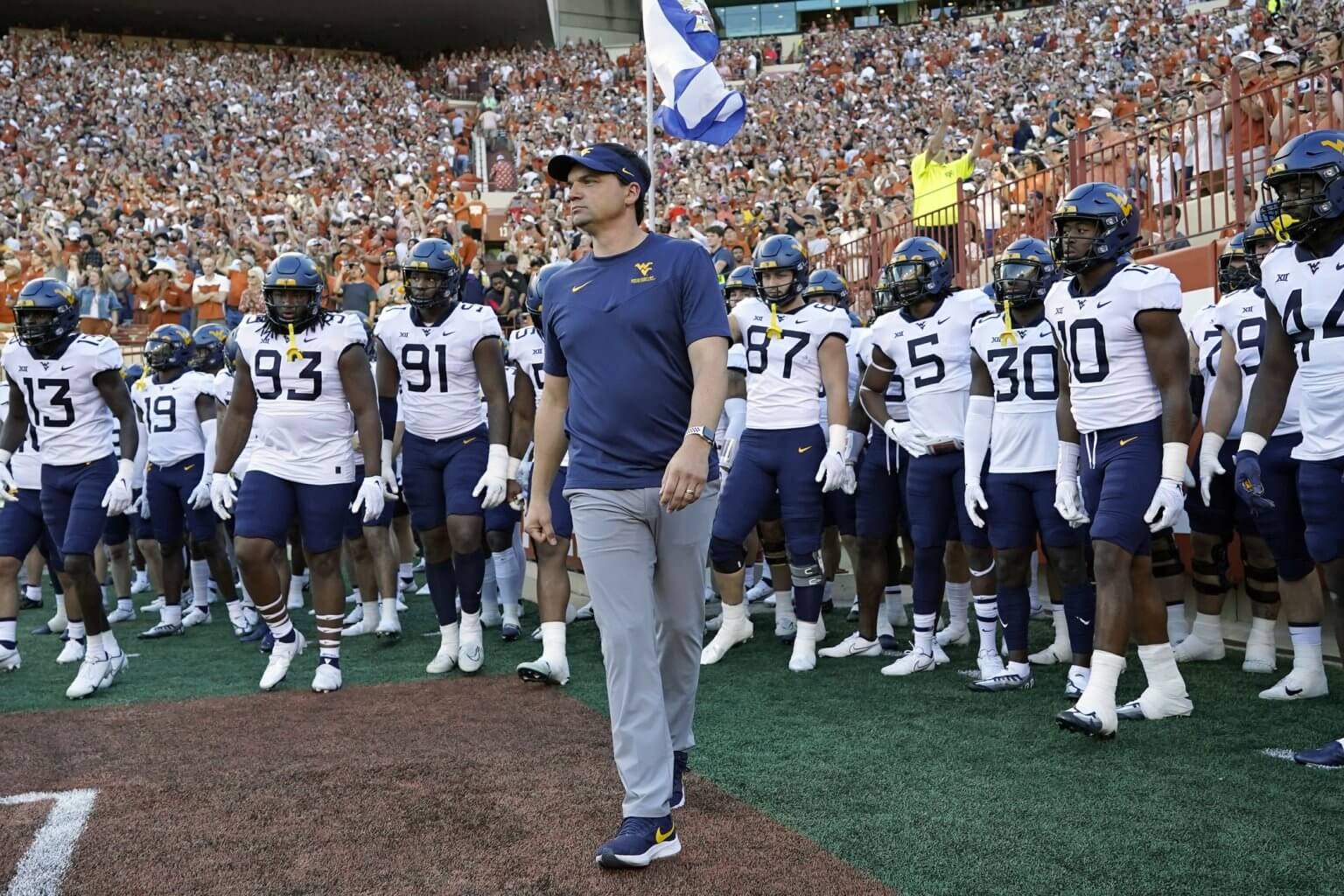 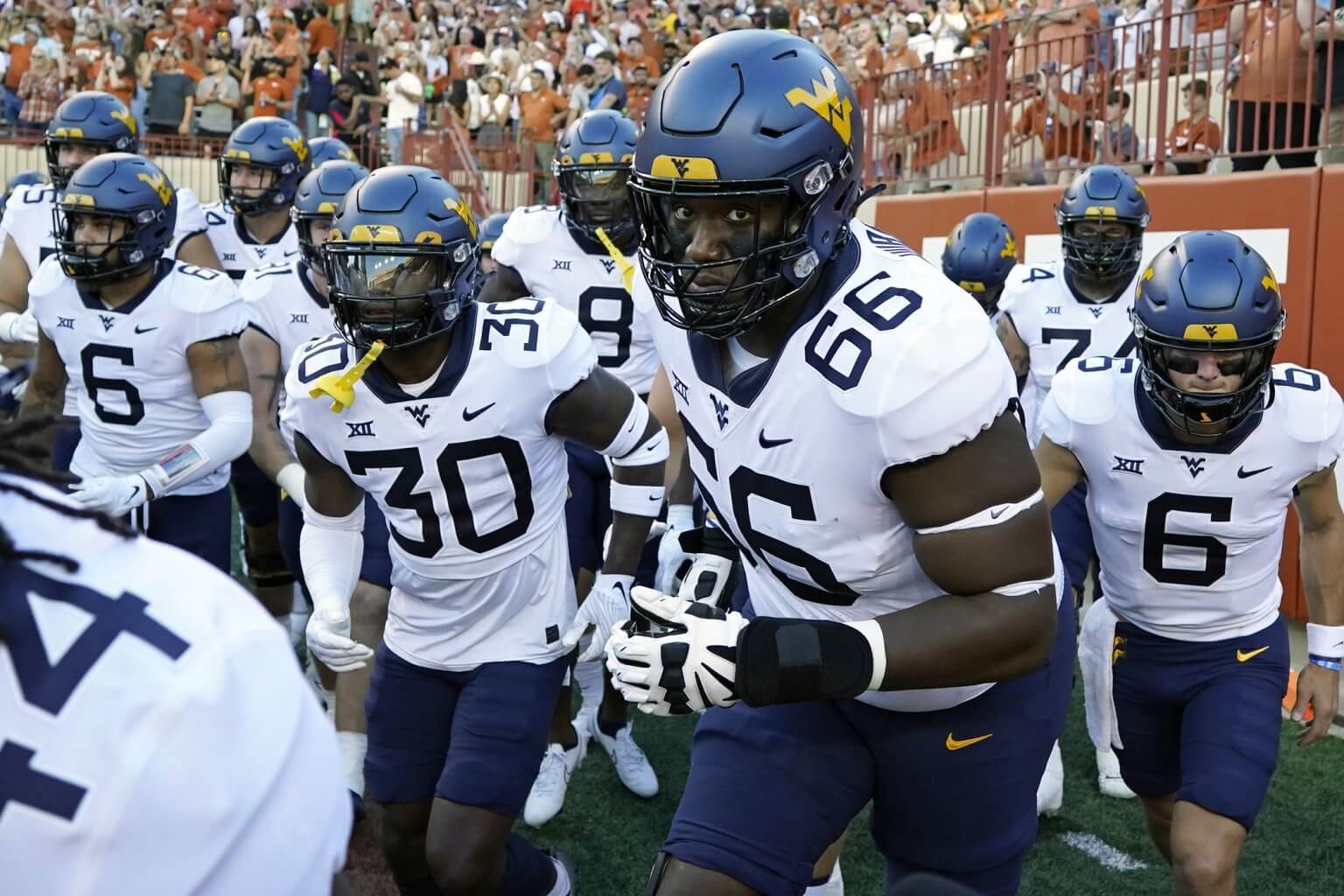 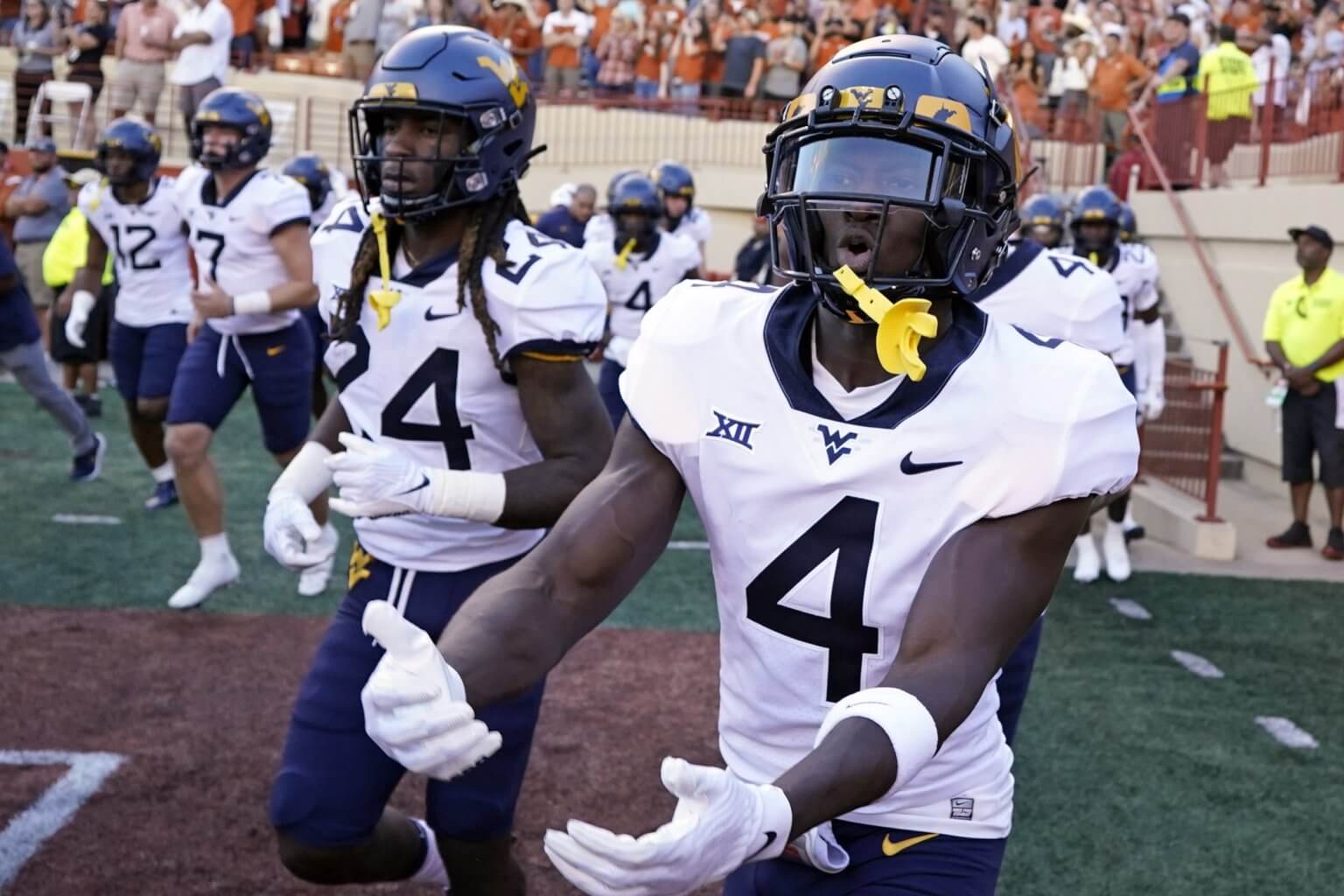 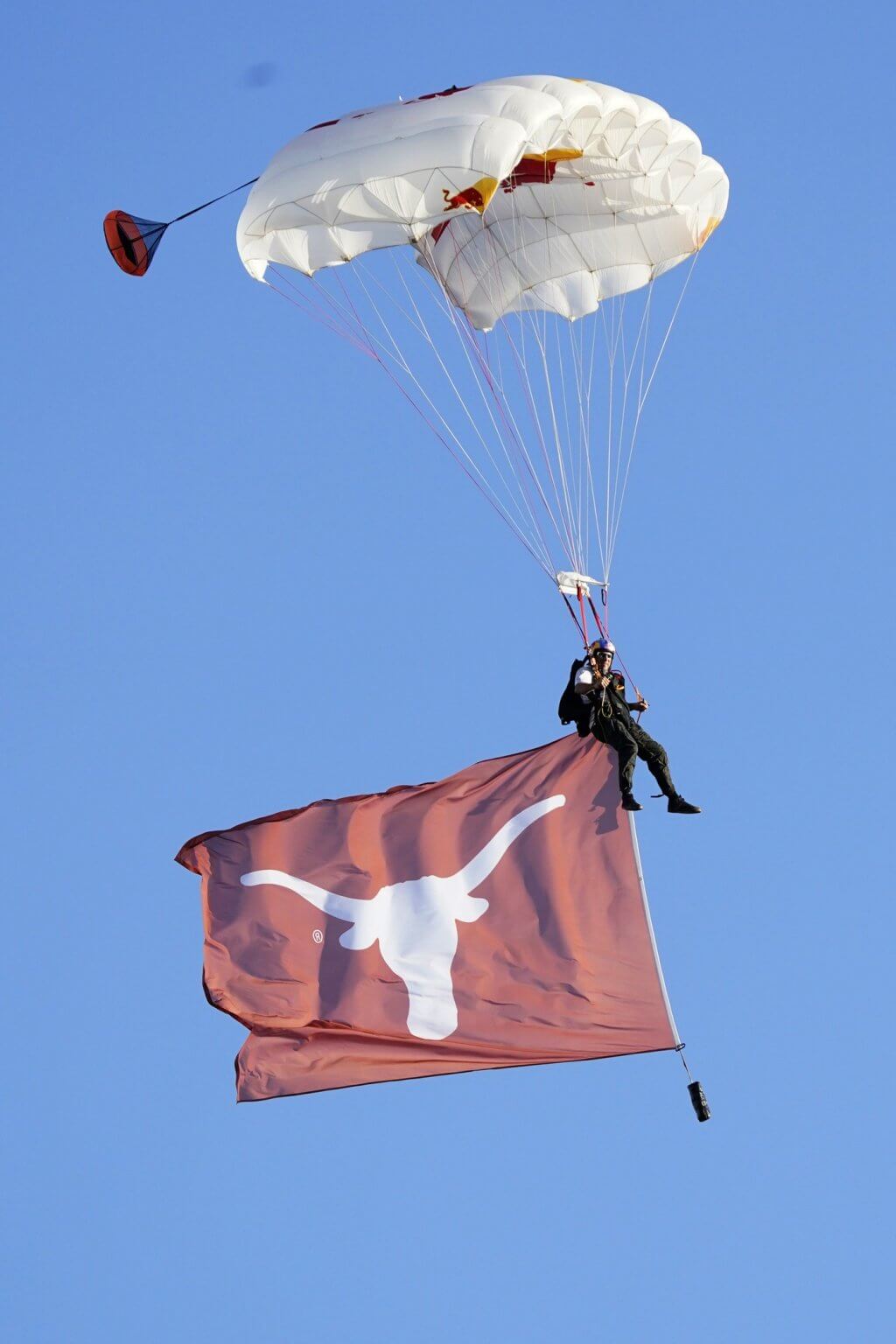 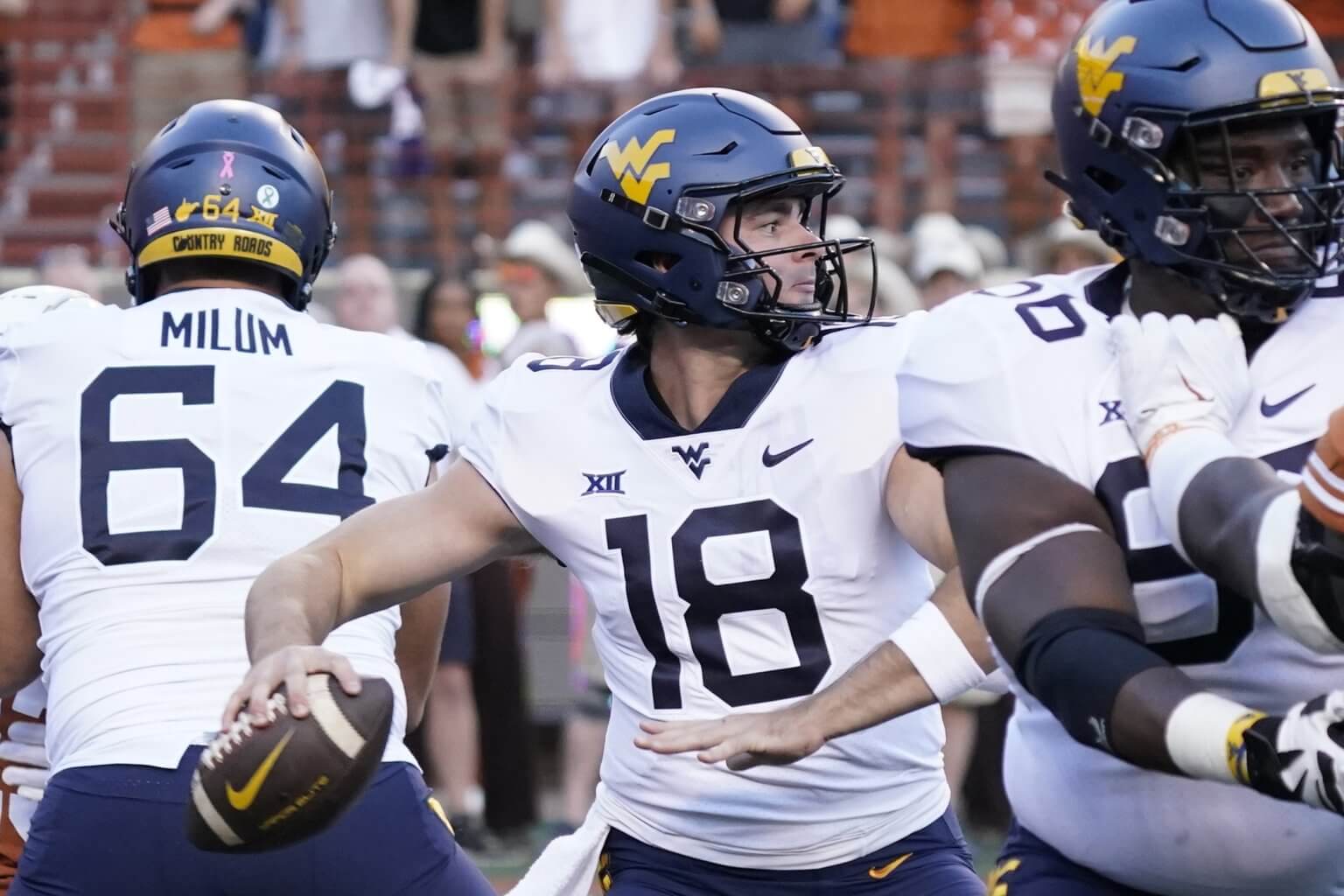 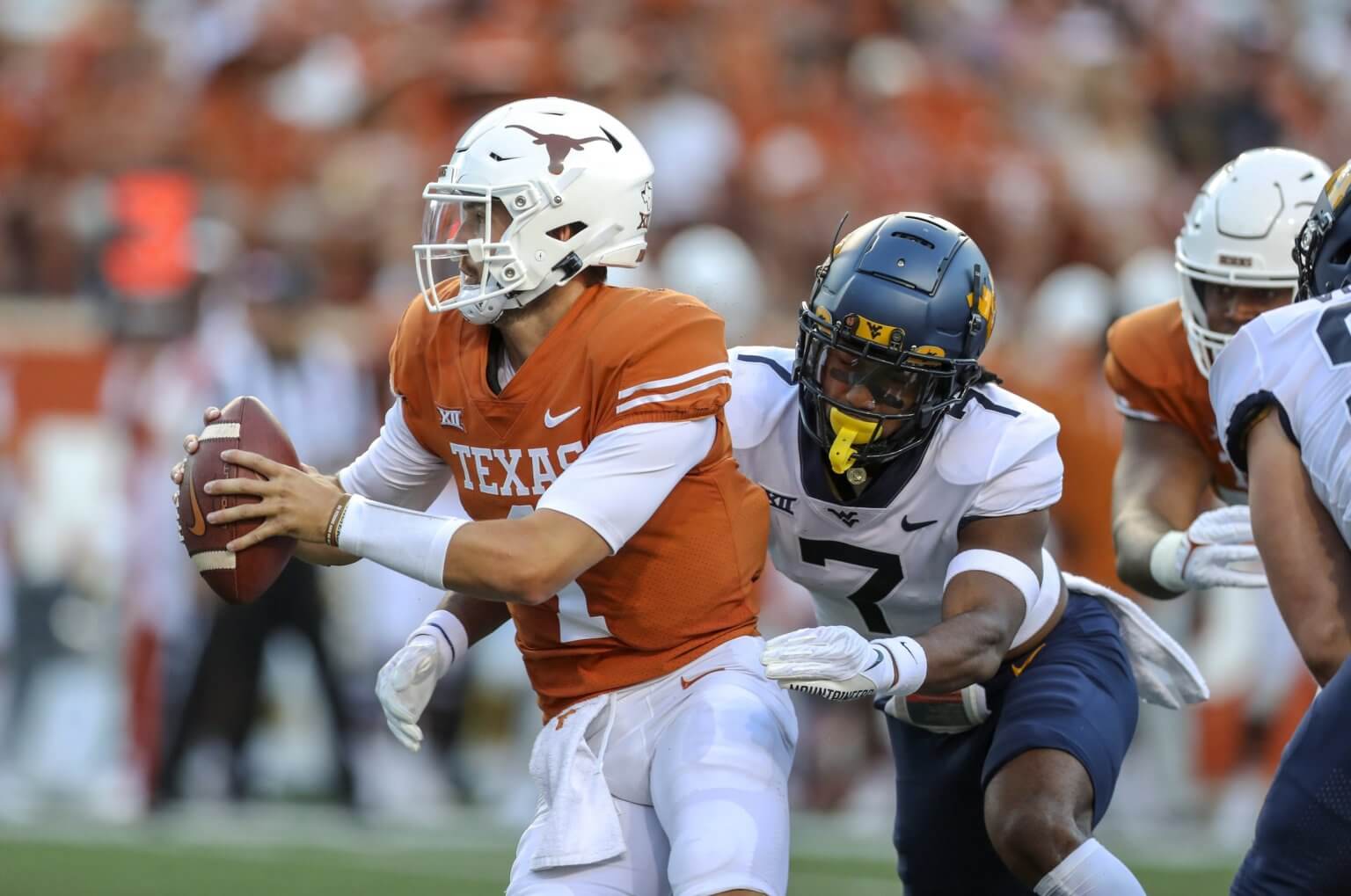 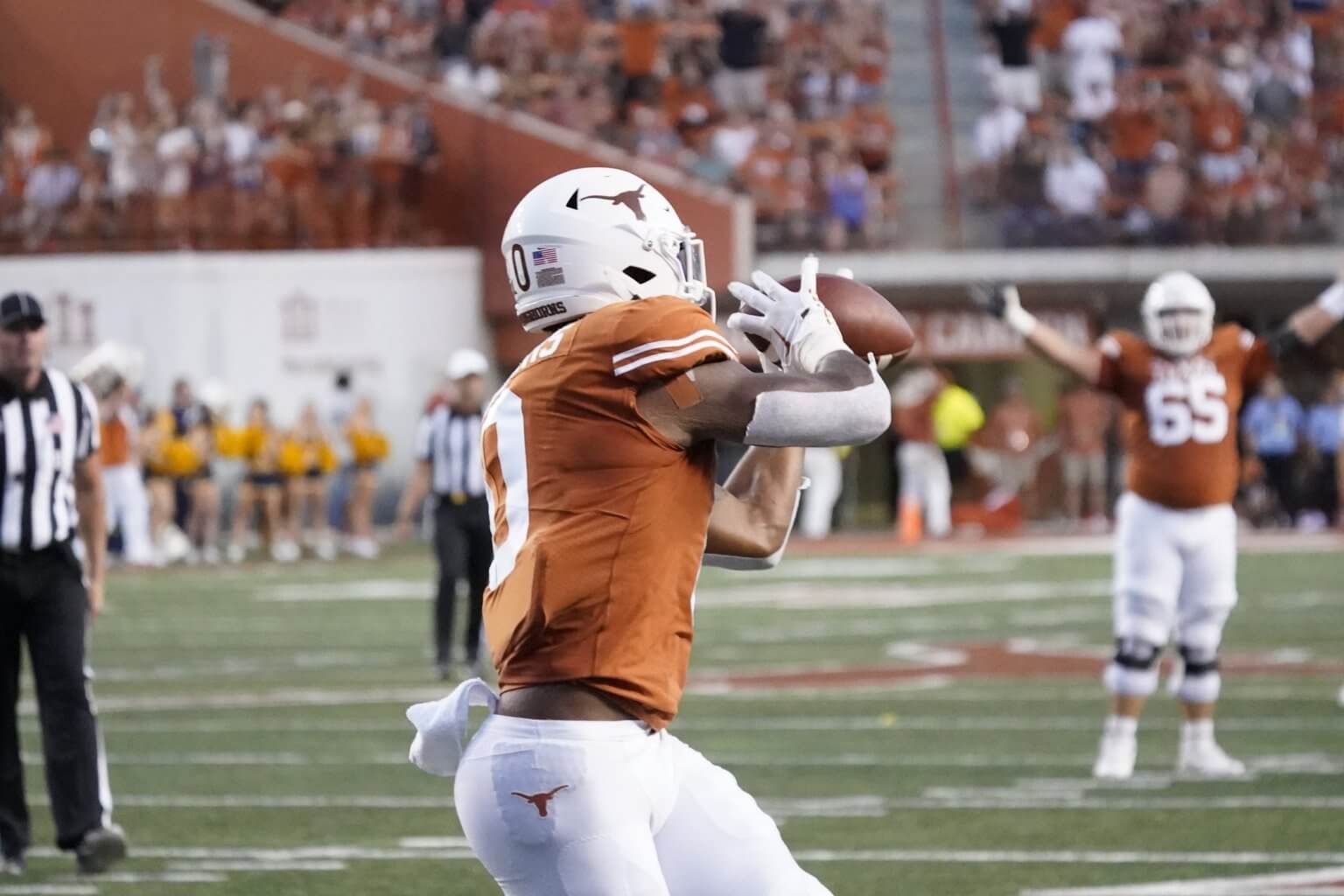 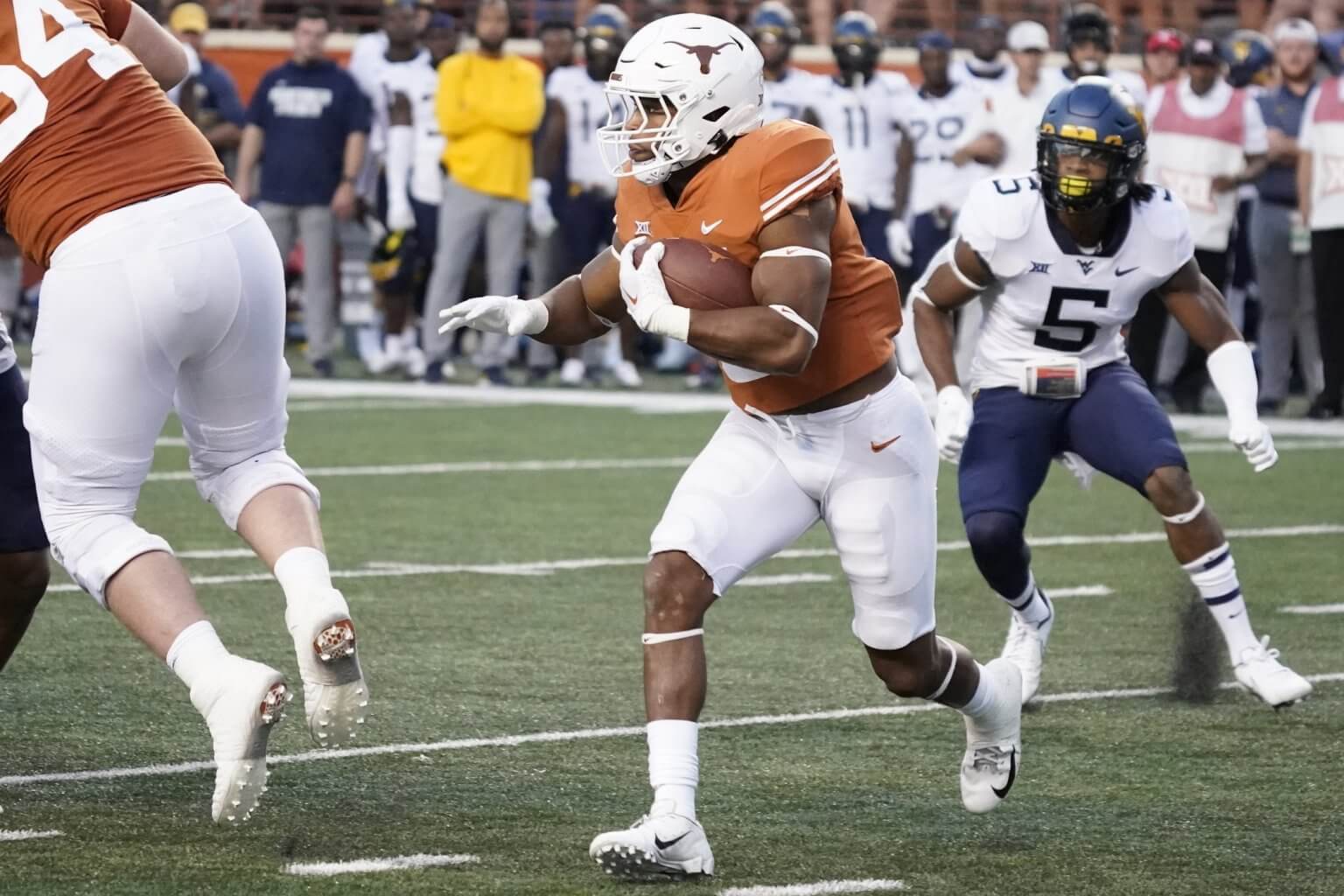 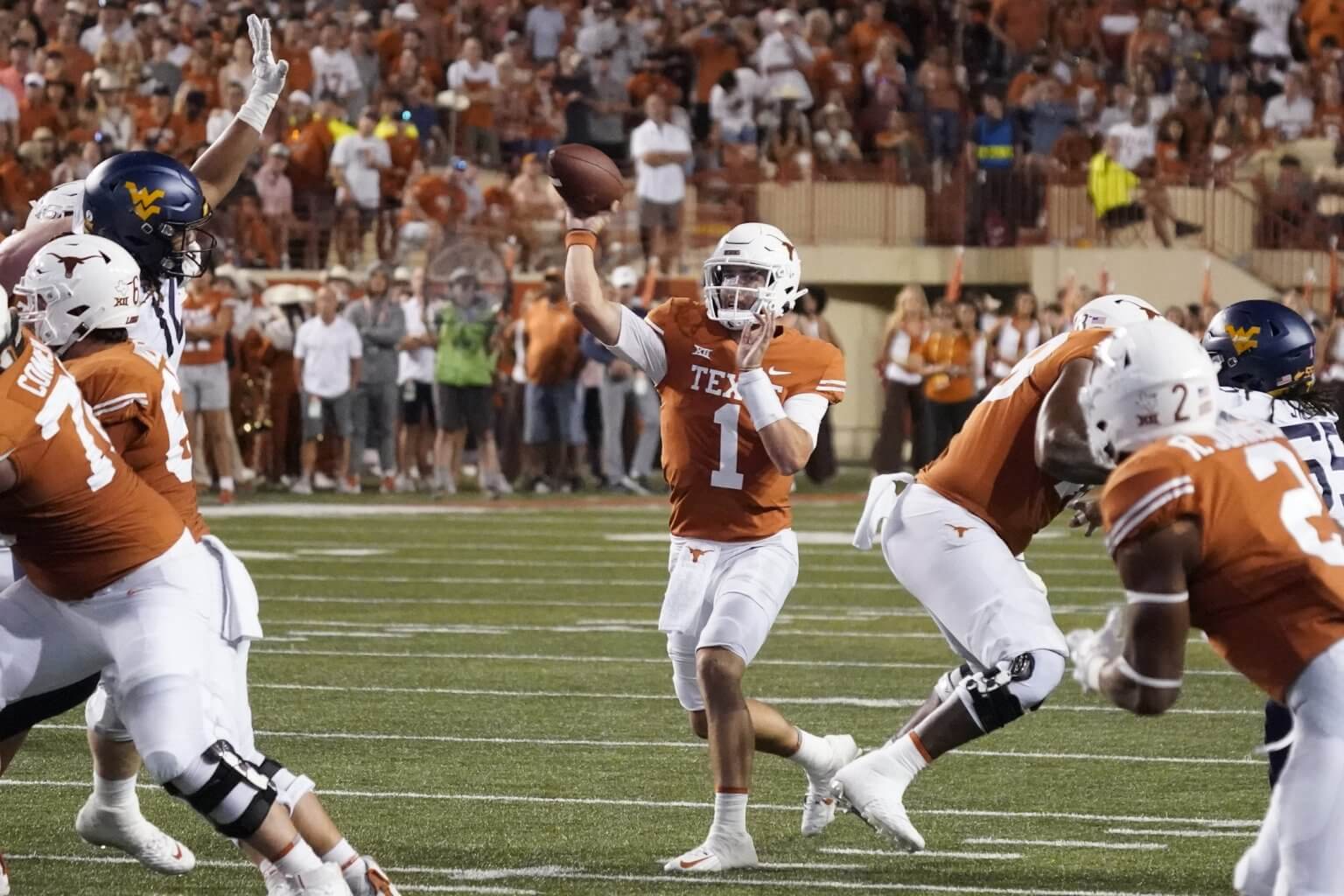 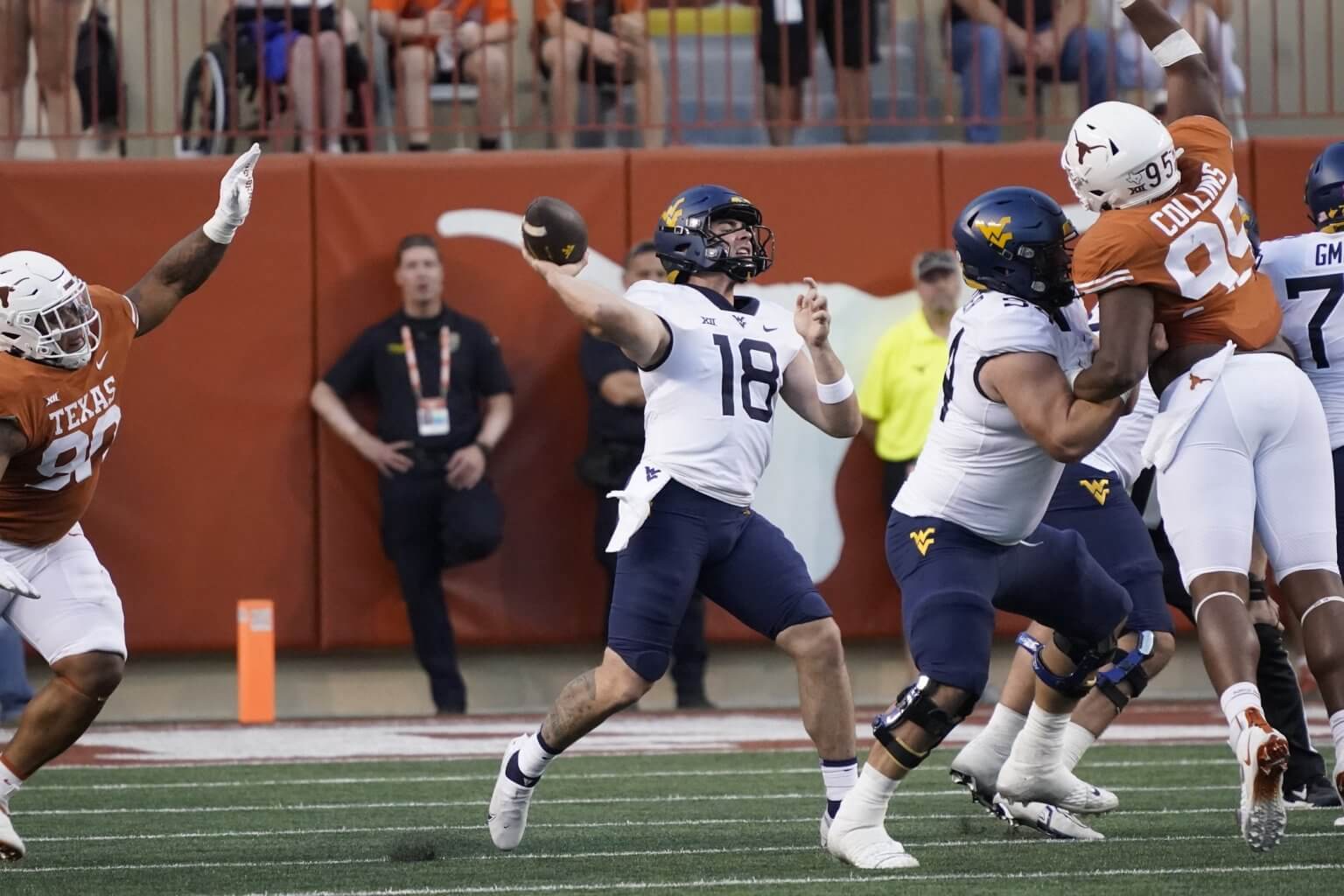 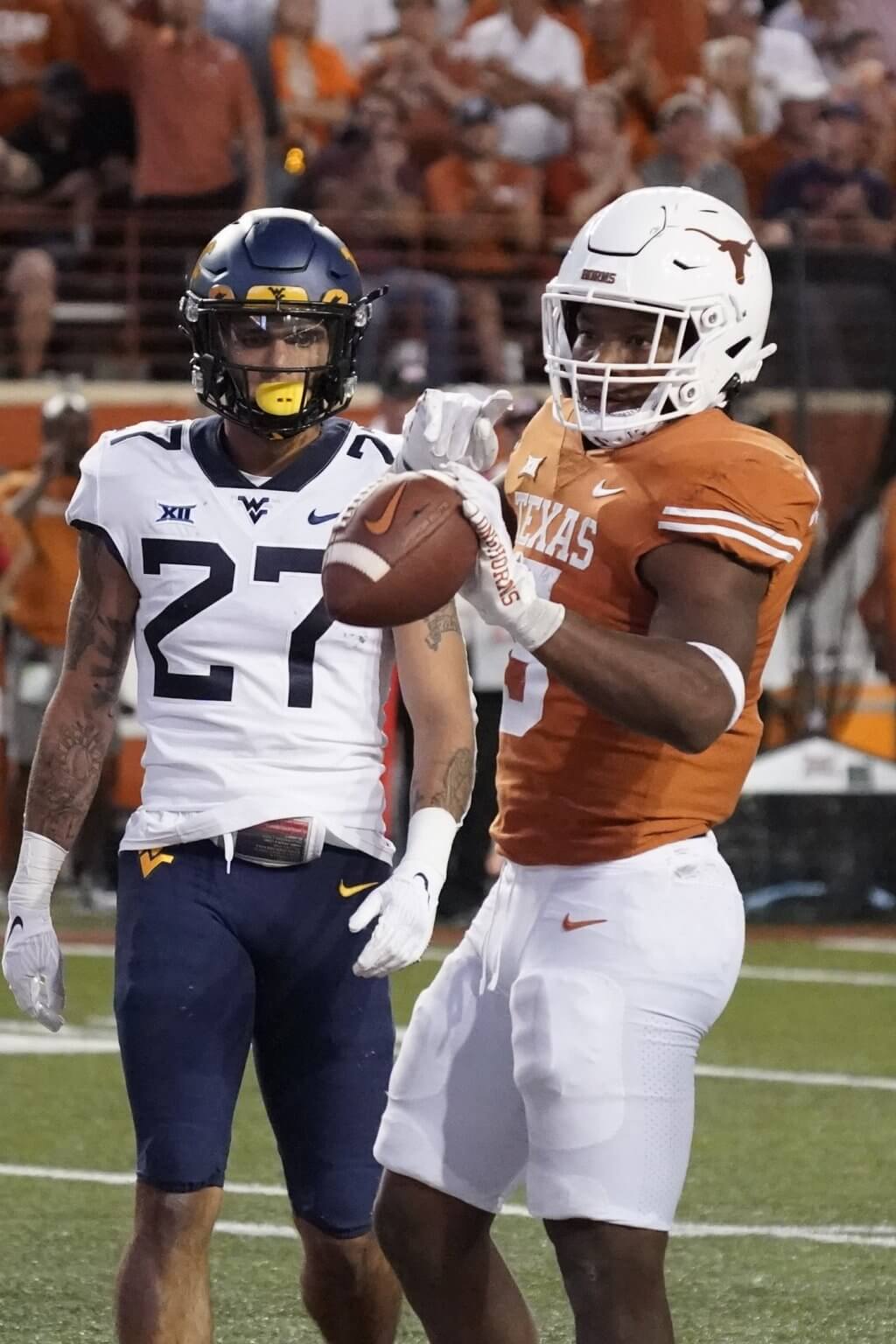 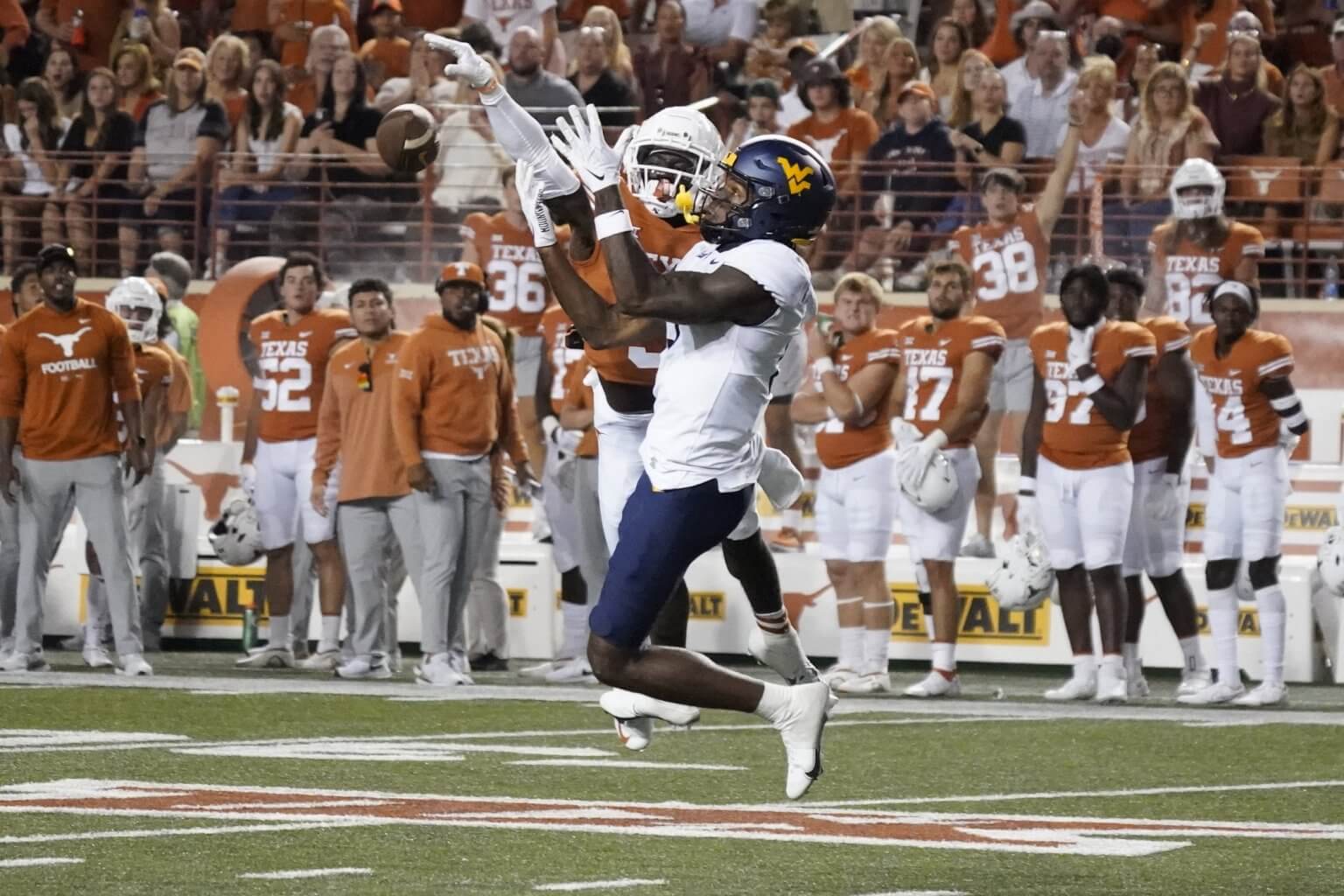 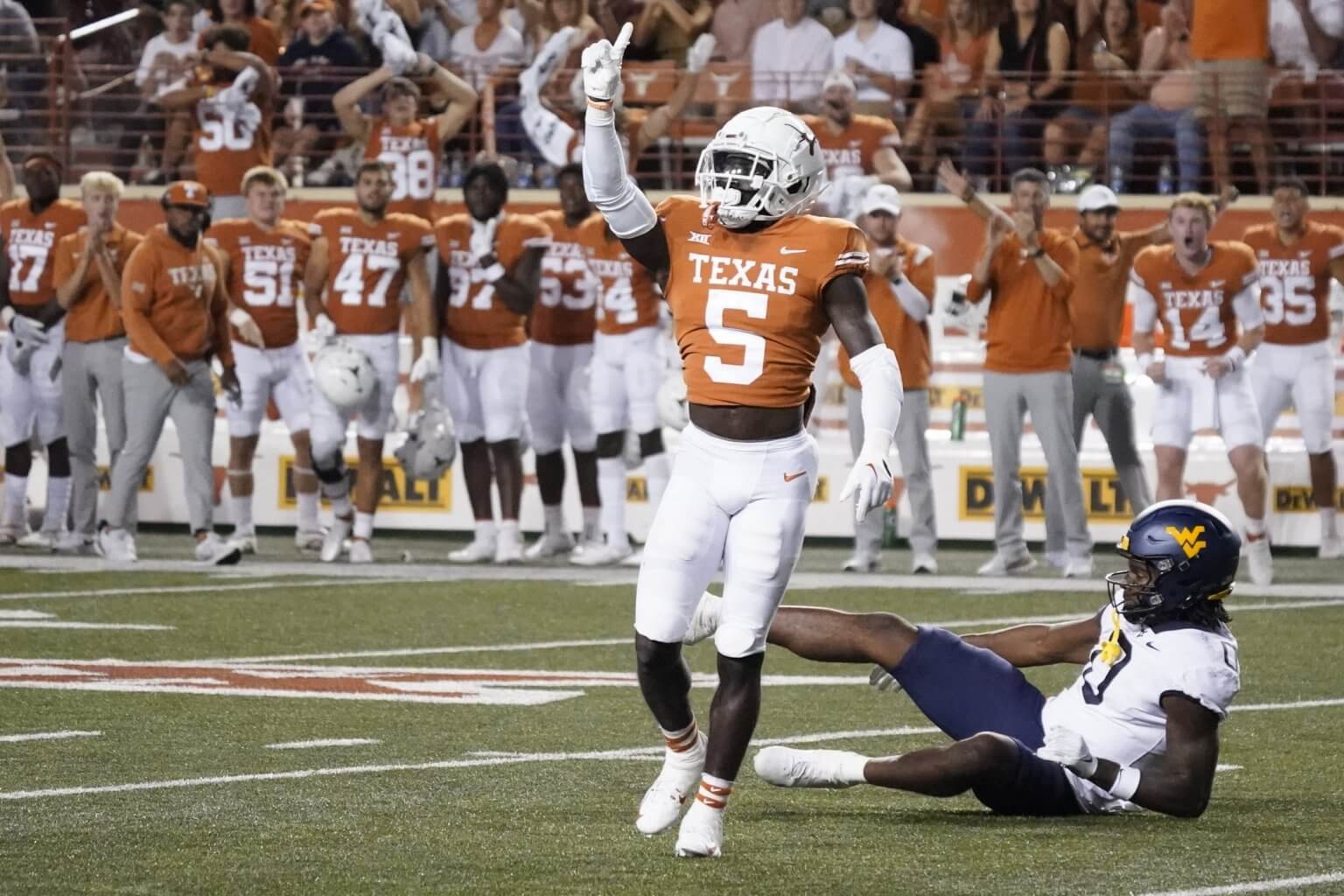 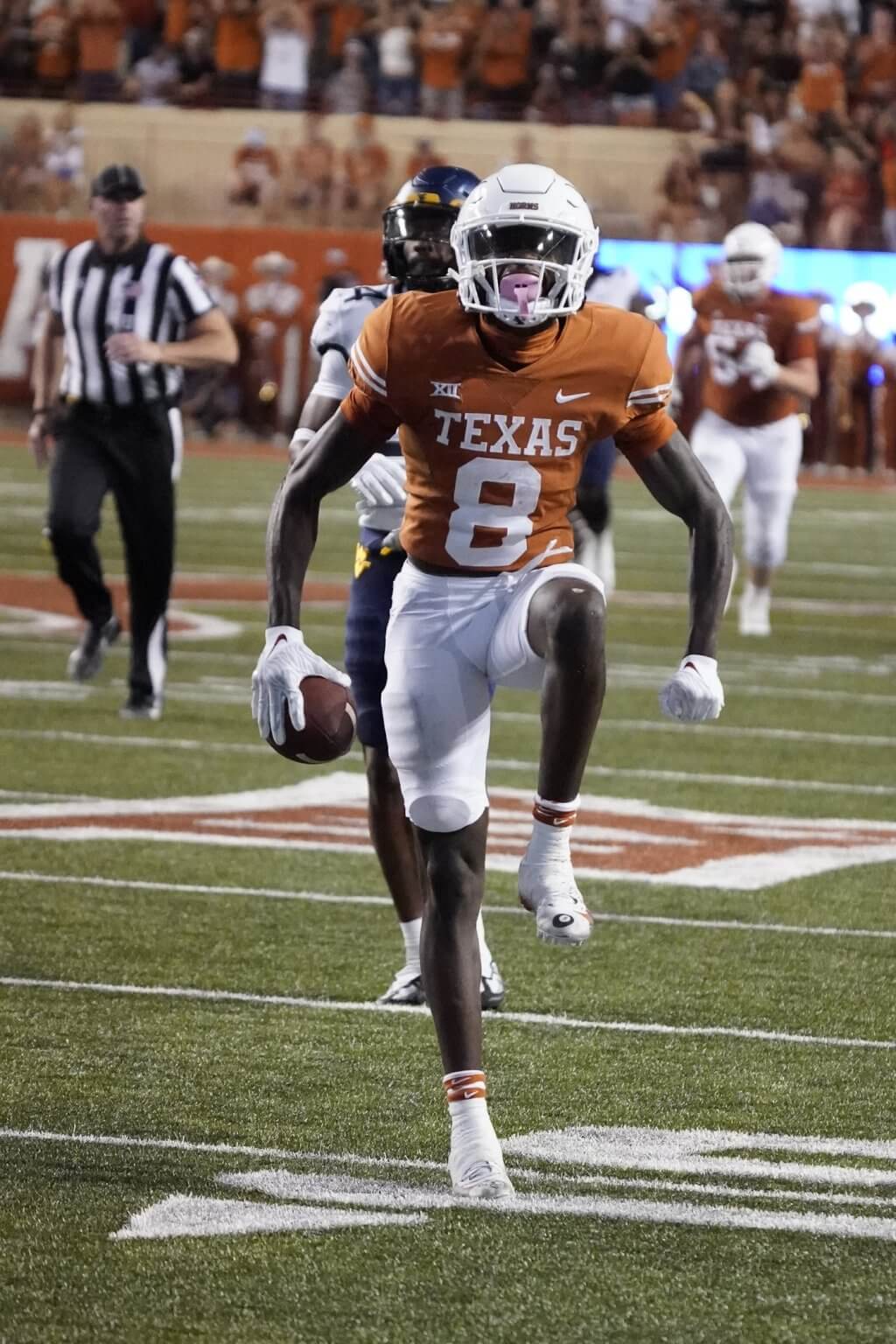 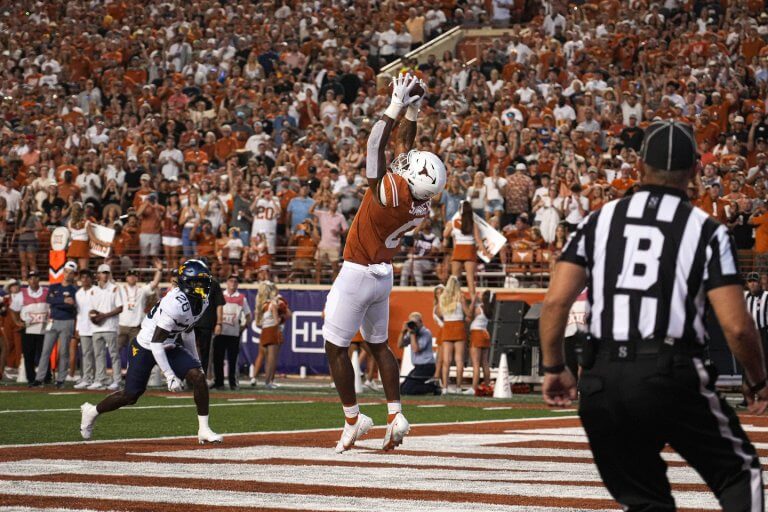 Texas tight end Ja'Tavion Sanders (0) jumps for a catch in the endzone for a touchdown against West Virginia during the game at Royal Memorial Stadium in Austin, Texas on Oct. 1, 2022. Aem Texas Vs West Virginia 16 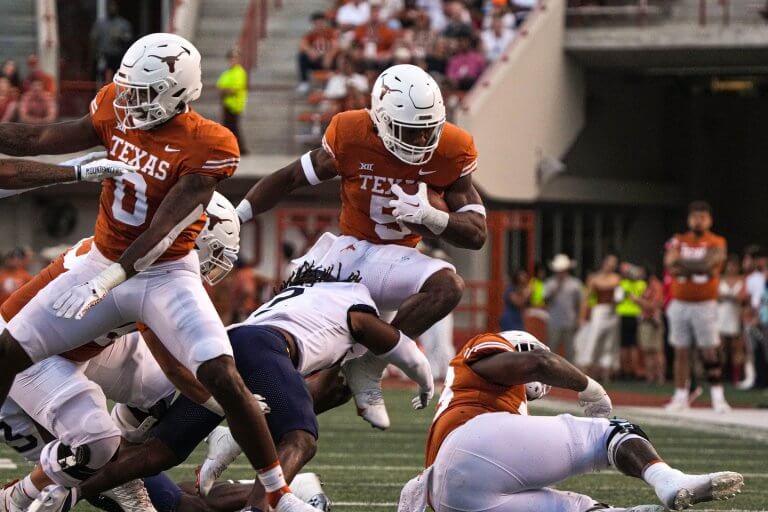 (Postgame “Round of Sound”)

AUSTIN, Tx. — Any momentum the West Virginia Mountaineers were able to store up from back-to-back wins dissipated quickly at Darrell K. Royal-Texas Memorial Stadium Saturday evening. Texas scored touchdowns on four consecutive possessions in the first half and they were not threatened the rest of the way in a 38-20 win over WVU.

The Mountaineers have not won three consecutive games since the 2018 season.

“Credit Texas. I thought they outplayed us early,” said WVU head coach Neal Brown. “They took control. I felt like they won the game within the first fifteen minutes. I felt like we could come in here and win the game.”

“We started off bad. There’s no excuse for it,” said WVU redshirt junior wide receiver Bryce Ford-Wheaton. “We were trying to dig ourselves out of the hole the whole game. It just wasn’t enough.”

WVU freshman phenom running back CJ Donaldson was injured on a rushing attempt with 6:25 to go in the third quarter. Trainers from both teams immediately stabilized Donaldson as he was taken from the field on a stretcher. Donaldson gave a thumbs up gesture to the crowd as he left on a cart.

WVU announced after the game that Donaldson was cleared to travel back with the team to Morgantown.

“It was scary,” Brown said. “I am sitting there as a father of three and I knew his mom wasn’t there. That’s really all I could think about.”

“It was terrifying, honestly,” said Ford-Wheaton. “Just to be playing with him one snap and then the next he is getting taken off on a stretcher.”

Texas opened the scoring midway through the first quarter. After WVU was unable to convert on a fourth-and-2 at the UT 40, the Longhorns marched 60 yards on 7 plays. The drive was capped by a 15-yard touchdown strike from Hudson Card to Xavier Worthy.

Texas doubled their lead on the next possession. On a double pass, Worthy hit a wide open Ja’Tavion Sanders for a 33-yard connection. Texas led WVU 14-0 after the opening stanza and the Longhorns outgained the Mountaineers 136-57.

A drive full of chunk plays gave the Longhorns their third touchdown in as many drives. Bijan Robinson’s 1-yard burst was the final play on a drive that contained gains of 22 and 24 yards on consecutive plays. Robinson carried the ball 21 times for 101 yards.

On UT’s next possession, the Longhorns covered 87 yards on 6 plays with the help of a pair of 15-yard penalties on West Virginia. With Texas backed up on their 3-yard line, a face mask penalty gave Texas a first down. A late hit out of bounds by Lee Kpogba followed two plays later. Sanders was wide open in the end zone to collect his second touchdown pass, this time from Card. The 13-yard score gave Texas a 28-0 lead.

West Virginia was able to find the end zone on their final possession of the half. A drive that included successful conversions on fourth-and-10 and third-and-9 was capped by a Kaden Prather 8-yard reception. The Mountaineers trailed 28-7 at intermission.

Texas needed just 111 seconds and 5 plays to erase WVU’s touchdown. Card tossed a pass into the end zone that was deflected by Aubrey Burks and right into the waiting hands of Worthy. The 44-yard touchdown reception was his second score of the game.

“They big-played us,” Brown said. “And they are better at some spots than we are. That’s the truth and we have to do a better job of getting our strengths to play to their strengths.”

West Virginia answered back with a time consuming drive (7:31). Tony Mathis’ 1-yard tote was the final play on an 18-play, 65-yard drive to pull the Mountaineers within three scores at 35-14. Justin Johnson’s 4-yard touchdown run with 4:31 remaining capped the scoring for West Virginia.

Daniels completed 29-of-48 passes for 253 yards and a touchdown. He was sacked three times.

Card connected on 21-of-27 passing attempts for 303 yards with three touchdowns. Texas averaged 15.3 yards per completion.

“He is almost a 5-star recruit. He is a pretty damn good player,” Brown said. “And Worthy is really good. He played really well tonight.”

“The run game comes down to winning at the point of contact,” Brown said. “We simply just didn’t do that tonight. We have been breaking tackles. And we didn’t break tackles early. We broke some in the second half and maybe on the last drive of the first half. But the possessions we had up until that last drive of the first half, we weren’t breaking tackles.”

“They were playing good defense in the first half,” said Johnson Jr. “We had a lot of opportunities and some of them we didn’t capitalize off of. That hurt us. In the run game, we just kept going and going and going and we eventually had success.”

Sports
Class AAA title game will showcase two of state's top quarterbacks in Shockey, Lochow
Parkersburg South and Huntington are playing Saturday in large part because of successful dual-threat quarterbacks that have guided two of the top offenses in the state.
By Greg Carey
Sports
Mountaineers look to bounce back from first loss when they host NC-Central Wednesday
The Mountaineers are 4-1 after losing to No. 11 North Carolina State last week.
By Joe Brocato
Sports
Keys to victory in the Class AAA championship game
MetroNews will have broadcast coverage of the Class AAA title game Saturday at noon.
By Joe Brocato
Sports
MetroNews Top Plays (Week 14)
By Joe Brocato