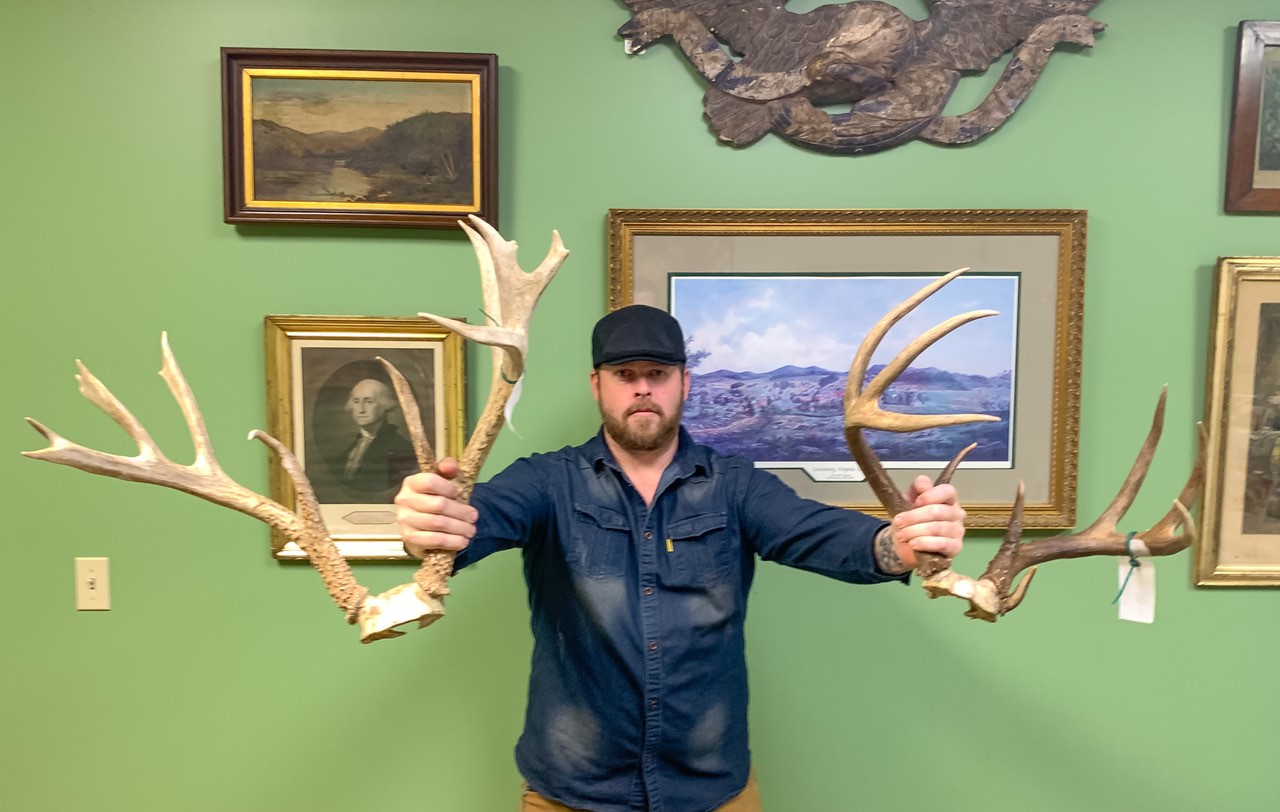 David Craft, shows off the antlers of one buck killed in NC and another in McDowell County returned to him after they were confiscated by W.Va. Natural Resources Police PHOTO: Submitted

CHARLESTON, W.Va. — A deer hunter initially charged with game law violations over a buck killed in McDowell County in 2020 is now clear of those charges. McDowell County prosecutors dropped the case against David Craft in April.

The dismissal of the charges ended a more than year long ordeal for Craft, who lived in Statesville, North Carolina at the time and now makes his home in Mercer County.

“They charged the guy and claimed to have evidence, but when it came time to present that evidence to a jury, they refused to do it and dropped the charges,” said Craft’s attorney John Bryan of Union, W.Va.

Bryan detailed his client’s defense in a video posted to YouTube on Thanksgiving Day.

MetroNews reported on the original charges in February 2021. West Virginia Natural Resources Police said they had received a complaint from individuals in McDowell County claiming Craft killed a large buck in the county illegally. West Virginia officers travelled to the Tarheel State to interview Craft about two bucks in particular. One of the bucks was killed in McDowell County, W.Va. and the other was killed in North Carolina. Craft had checked in both bucks in their respective state and denied any wrongdoing.

According to Craft, the West Virginia officers showed up at his home accompanied by two officers from the North Carolina Wildlife Resources Commission to talk about the two racks. He said the officers then went to his taxidermist’s shop to examine the racks. During the visit, both sets of antlers were confiscated.

Craft hired a criminal defense attorney and challenged the case in McDowell County Magistrate Court. The case was set for a trial, but was continued on four separate occasions.

“They kept claiming they were waiting on DNA test results, saying they found deer hair at the location and were going to compare it to my client’s deer. They kept saying they were waiting on those results and at the last hearing the McDowell County Magistrate said there would be no more continuances and the trial was set for April. Less than a week before the trial date, they dropped the charges,” Bryan explained.

Bryan used the West Virginia Freedom of Information Act to obtain all evidence and information pertaining to the investigation. West Virginia officers indicated initially they had photos, physical evidence, and testimony from individuals supporting their charges. Bryan said the FOIA produced nothing he could see which would support the charges or confiscation of the two racks.

“The FOIA I received had no indication of any DNA evidence. It appears the only ‘evidence’ they had was just hearsay suspicion from a hunt club that one of those deer had been killed on their property,” he explained.

Bryan added his FOIA also revealed no court authorization for seizing the antlers or any investigation by the North Carolina law enforcement agency.

After the charges were dismissed, Craft’s antlers were returned to him. He and Bryan are now considering a lawsuit over the incident against the West Virginia Natural Resources Police.

“We will probably file a suit, unless the state wants to reach out and make things right. That would be our next step,” said Bryan.

MetroNews contacted the West Virginia Division of Natural Resources for comment on the case, but the agency declined to make any statements due to the potential for pending litigation.

Outdoors
Mountaineer Heritage season offers a chance to go back in time
Four-day season for deer, bear, and turkey features hunting like the original mountain men survived on the West Virginia landscape.
By Chris Lawrence
Outdoors
Hardy County listener is our December winner in the Hoodoo Sports Trophy Photo Contest
Congratulations to Phillip Crews of Mathias, W.Va.
By MetroNews Staff
Outdoors
A look back at the top outdoor stories in West Virginia for 2022
Five record fish, a multi million dollar upgrade to the Bowden Fish Hatchery, and several sportsmen accomplished great feats in the outdoors which will long be remembered.
By Chris Lawrence
Outdoors
Three bucks in 33 years using one very special rifle
Monroe County hunter Ken Mahon shares the story of his very special Pre-64 Winchester Model 70 .
By Chris Lawrence