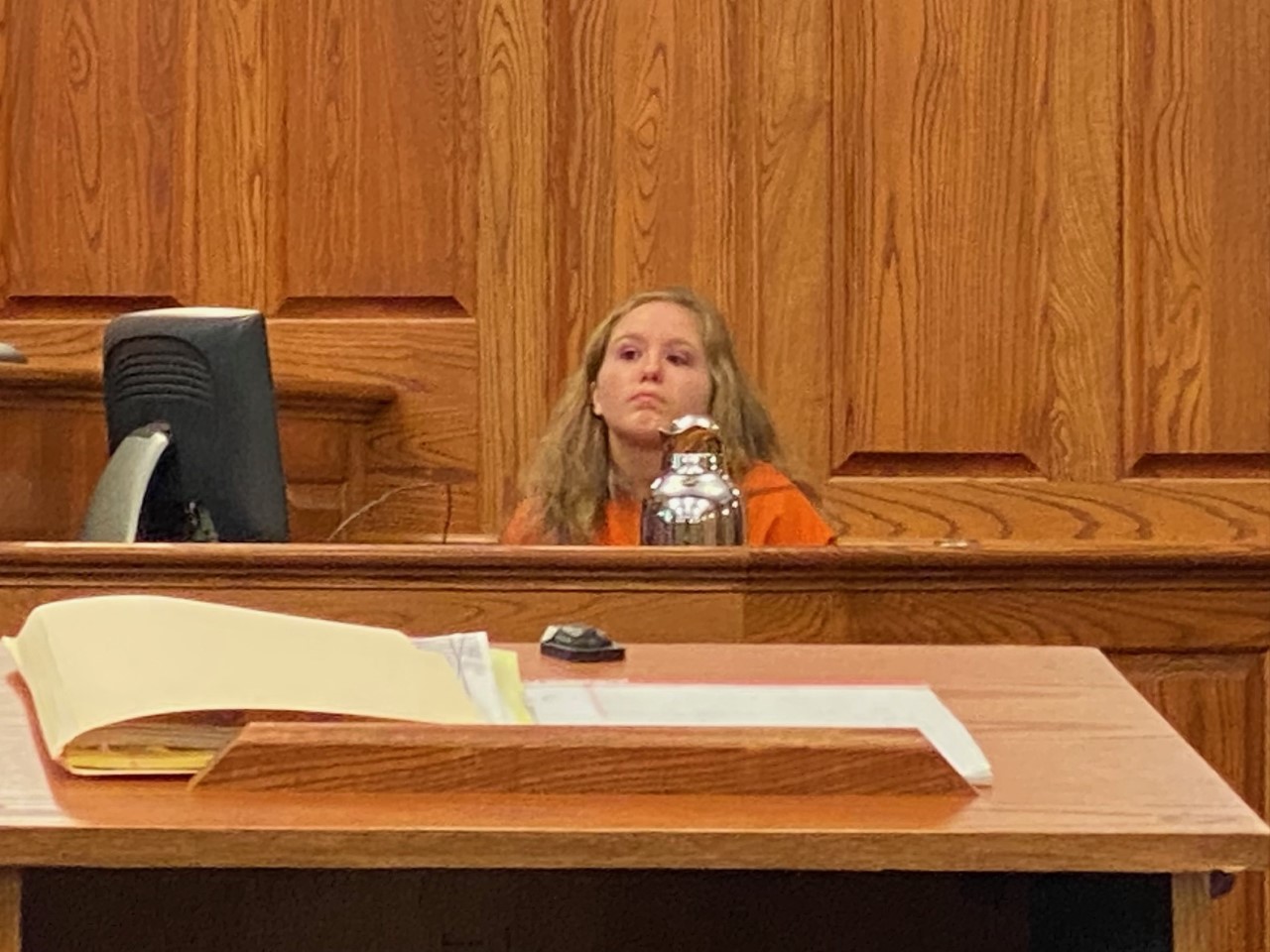 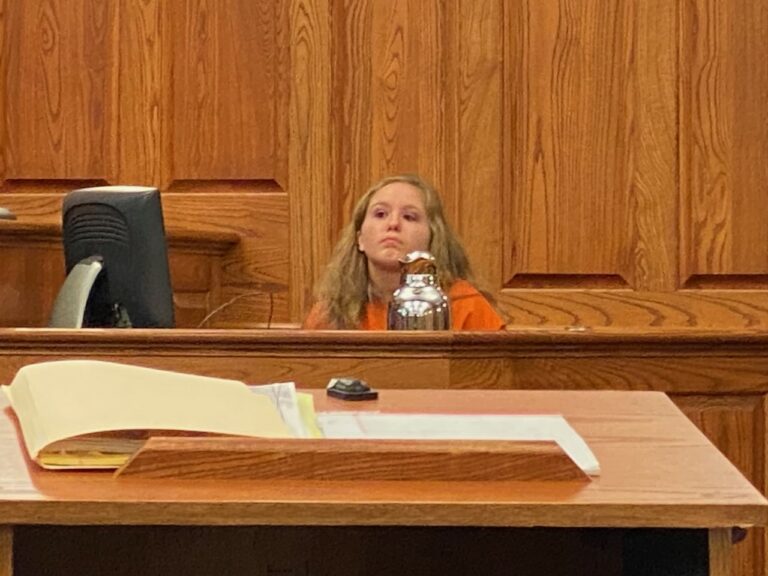 Rebecca Walker, 19, is currently serving a 10 year prison term for being an accessory after the fact of first degree murder. Carrie Hodousek/MetroNews 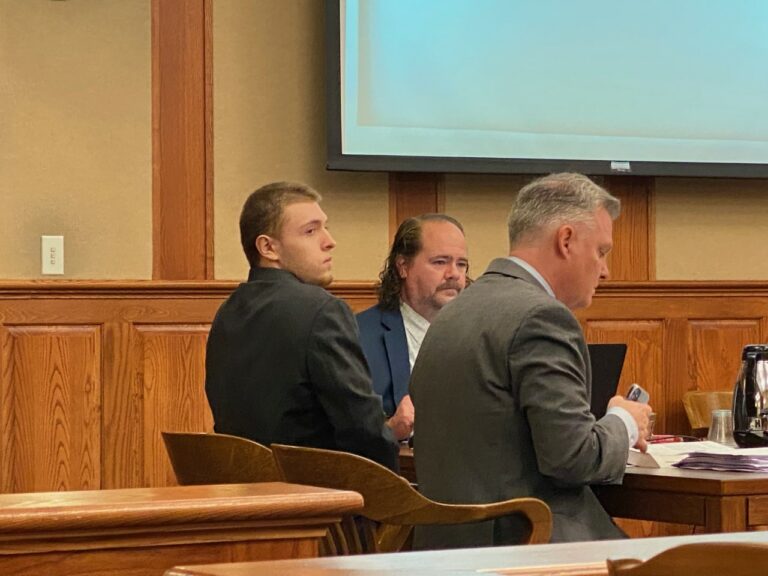 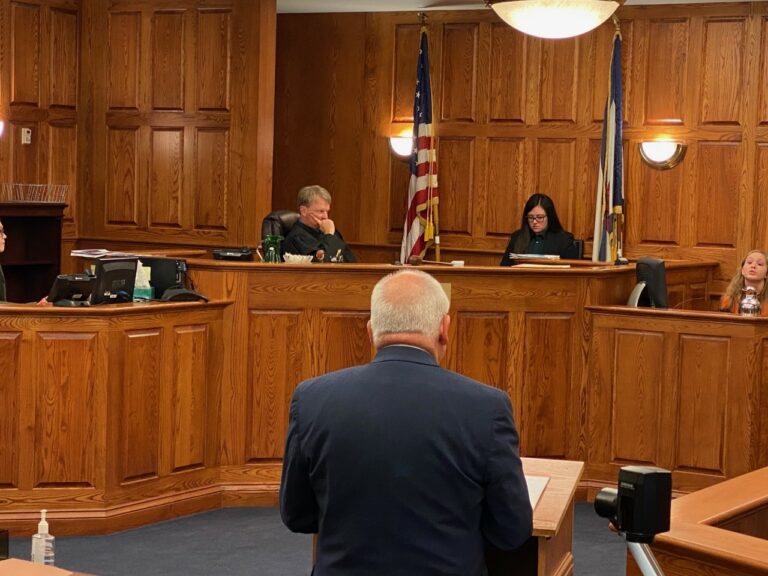 CHARLESTON, W.Va. — A Kanawha County teen, who is on trial this week for murdering his four family members two years ago, was on a video call with his then-girlfriend during the killings, according to testimony revealed in court Tuesday.

“I was on the video chat with him,” Rebecca Walker, 19, told Kanawha County Chief Assistant Prosecutor Don Morris. “I was texting it to him on the video chat. I told him to hurry up and do it.”

Walker, in a bright orange jumpsuit, described the moments she “protected” Gavin Smith, 18, from getting caught by the police after he murdered his mother Risa Mae Saunders, 39, his stepfather Daniel Dale Long, 37, and his brothers Gage Ripley, 12, and Jameson Long, 3, in their Cemetery Road home near Elkview on Dec. 9, 2020.

Smith, who was 16 at the time of the killings, hid in the woods and then at Walker’s grandmother’s home until police arrested him a few days later. He was charged with four counts of first degree murder.

Walker is currently serving a 10 year prison sentence after pleading guilty to being an accessory after the fact of first degree murder.

“Who had the gun in their hand?” Morris continued.

“Did he also have a knife?” Morris asked.

“Yes,” Walker said. “He was planning to kill his mom and his step dad.”

Walker testified she wasn’t able to see what Smith did “because his screen was pitch black,” but she did hear Smith’s 3 year old brother crying in the background.

Walker said Smith’s parents did not want them seeing her or calling her and that she couldn’t understand why.

“I know that he wasn’t allowed to talk to me. He wanted to be around me and spend time with me, but his parents didn’t want that to happen,” she said.

Defense attorney John Sullivan previously said during Monday’s opening statements evidence showed Smith’s parents put padlocks on a door inside the house and on the refrigerator.

Walker told Sullivan during cross examination Smith killed his family because he was “angry” that he wasn’t allowed to spend time with her.

“Did you want him to shoot his family?” Sullivan asked Walker.

“Unfortunately, yes I did,” she replied.

“Why did you want him to do that?” Sullivan asked.

“Because I felt like if he did it, it would give me and him the opportunity to be together,” Walker said.

During re-cross examination, Walker told Morris she didn’t tell the truth when police asked her what happened.

“I wanted to protect Gavin,” she said.

Walker went on to say she tried to seek counseling for Smith before the killings “so he could talk to someone about what was going on at home.”

“I was trying to be there for him,” she said. “I was trying to do what I felt like I needed to do to make sure he had somebody. It made me angry that they (Smith’s parents) felt the way they did about me because I didn’t think I had done anything wrong.”

Smith and Walker had met a few weeks before the COVID-19 lock down in Spring 2020, yet court documents showed the couple exchanged over 15,000 pages Facebook messages.

Detective Jared Payne with the Kanawha County Sheriff’s Office testified Tuesday about the messages between Smith and Walker from Dec. 5-10, 2020.

“Ok baby, I’m a murderer,” one message from Smith said.

“I killed Jameson. I’m crying,” another message from Smith read.

The jury on Tuesday was also shown graphic photos of the victims’ dead bodies inside the home.

The trial is before Kanawha County Circuit Judge Kenneth Ballard and is scheduled to resume Wednesday morning.