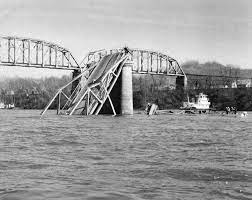 The bridge was loaded with rush hour traffic when a small crack in an eyebar which held the bridge in suspension failed. The failure sent the bridge that connected Point Pleasant, West Virginia and Gallipolis, Ohio, into the Ohio River.

That afternoon, Bellamy, now the executive director of the Mason County Convention and Visitors Bureau, was a third grader trying to figure out how to avoid a trip with his father to the only grocery store in the area located across the bridge in Ohio. So Bellamy said he climbed up to the top of a tree to avoid his father and waited.

As the minutes passed, Bellamy eventually saw his mother in their car driving to get home and could tell something was wrong. As his mother got closer he could see she was emotional. When she arrived Bellamy climbed out of the tree and as his mother cried she hugged and kissed him.

Bellamy had no idea what had happened yet.

“My mother had been on Main Street when the bridge fell and she thought my father and I were on our way to the grocery store and she thought we were dead,” Bellamy told MetroNews affiliate WMOV Radio. “When she got home she cried all the way down the road when she saw me sitting up in that tree.”

Bellamy said the collapse of the bridge hurt Point Pleasant in many ways. The lives that were lost that had contributed greatly to the community  along with the decision on where to build the new bridge.

According to Bellamy, the original U.S. 35 Silver Bridge, built in 1928 by the American Bridge Company, channeled people traveling to Huntington or Charleston right through the Point Pleasant downtown. The bridge built to replace it, completed in 1969, took a different path and in the decades that followed downtown businesses dried up and the area was never the same.

“When they moved the bridge they took it not only out of the middle of the town, but they took it clear across the Kanawha River to another place,” Bellamy said. “It just killed Point Pleasant’s Main Street, it was a ghost town for a long time and we’ve just recently recovered from it.”

The collapse was national tragedy that resulted in new legislation to promote bridge safety. In 1968, lawmakers passed the Federal-Aid Highway Act of 1968, which established a National Bridge Inspection Program which created bridge inspection standards still in use today.

“I really hadn’t thought how much it affected me but you have to cross two bridges to go anywhere in Point Pleasant,” Bellamy said. “Bridges are a big part of our life and when one goes down it puts a lot of doubt in you.”