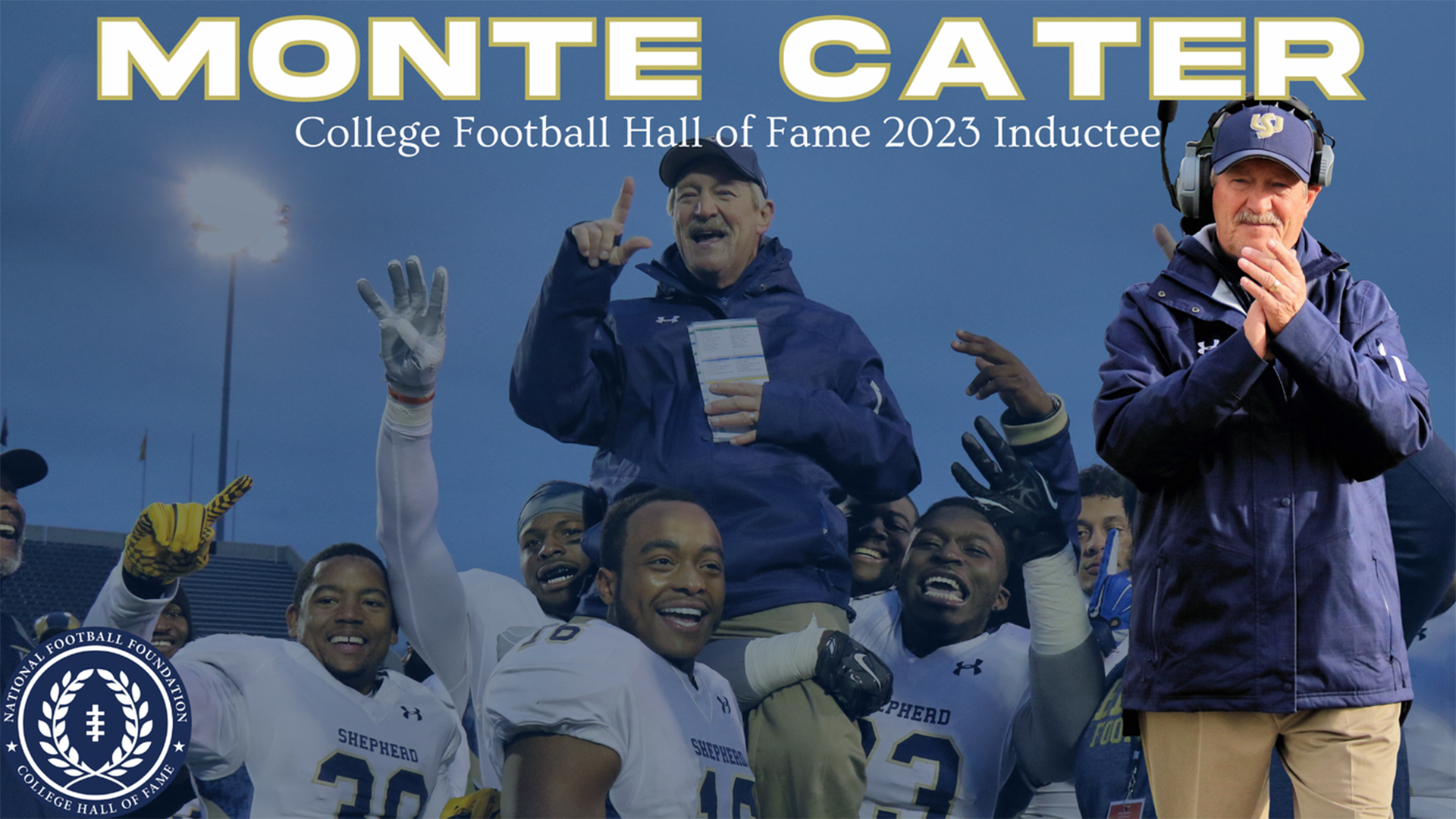 There is also a local tie to the class with Monte Cater, the winningest college football head coach in West Virginia state history, set to become only the second non-West Virginia University or Marshall figure to be enshrined in the College Football Hall of Fame. Cater joins Cliff Battles from West Virginia Wesleyan in that distinction.

Cater, of Shelbyville, Ill., coached 31 seasons at Shepherd, where he posted a 245-93-1 record. His 245 wins account for nearly 50 percent of the program’s total wins.

Although Cater has a lengthy list of accomplishments, he never imagined being enshrined in the hall of fame would be one.

“I do not think you usually have those things in your mind,” Cater said. “The biggest thing was being nominated a year ago. Of course everything is a year behind because they put in the Class of 2022 last month. This class I am in will not go in until this December. I never thought of this.”

Cater credits his time long before graduating from Milliken College in Illinois in 1971 to helping peak an interest in coaching.

“Once I had the opportunity to play football in junior high school, I was in love with the game, and no one plays for too long. I certainly was not big enough to play in the NFL,” Cater noted. “The biggest thing was that I wanted to be a part of it. I had great people responsible for that and keeping that dream alive. It has always been something I have wanted to do. I felt like it was something I wanted to do for as long as I am going to work.”

After Cater graduated college, he became an assistant coach at his alma mater for three seasons.

That led Cater to Wisconsin, where he spent five seasons as a head coach at Lakeland College. Cater had success at Lakeland and won three conference titles during his tenure.

Cater went on to become the 12th head coach at Shepherd College, where he replaced then-interim coach Mike Jacobs after one season.

It all fell into place for an ambitious Cater at the time.

Monte Cater was a head coach at Lakeland College in Wisconsin before becoming the head coach at @SURamsFootball. How did he end up in Shepherdstown? He talks about his journey with @TonyCaridi, @BradHowe07, and @HunterWvu88bgn. WATCH: https://t.co/yCFQ3nEhk6 pic.twitter.com/hdP7rALDQB

“One of my coaches was also the baseball coach at Lakeland, and he ended up getting the job at [Davis & Elkins],” Cater recalled. “Shepherd was coming off a year in between coach [Walter] Barr and coach Mike Jacobs as the interim. Mike talked to Dean Peace, who oversaw the athletics and physical education department. The two spoke because Shepherd was looking for a football coach since Mike would not simultaneously be the football coach and athletic director. He mentioned me. Then I got an interview.

“From what I understand, other candidates turned the job down. I do not know if it was the big-time money or not. It was a big part of my life for 31 years.”

Cater led Shepherd to 17 conference titles — 13 in the West Virginia Intercollegiate Athletic Conference and four in the Mountain East Conference.

“It was the people I was involved with,” Cater said. “I got 75 texts, calls, and Facebook messages from several people yesterday, and it continued today. The people I was around made things comfortable, and we won enough not to get fired. You are either looking to leave or not. However, I was a finalist for Cal (Pa.), Morgan State and where I went to graduate school at Southern Illinois. I do not think I had a lot of emphasis on the leaving part to find something better. Shepherd was an enjoyable place to be.

“There were people that did not stay there because of the money, but for the place.”

Cater also served as Shepherd’s athletic director from 1993-2004, where he helped with Shepherd’s transition from NAIA to Division II athletics.

Shepherd had six unbeaten regular seasons under Cater’s watch and only four losing seasons. Cater led the Rams to at least nine wins and 13 seasons, including a national runner-up finish in 2015 and a run to a national semifinal the following year.

Cater, who retired in 2017, remains in the top 20 in career wins as a college football coach across all levels.

His induction into the College Football Hall of Fame will take place at the 65th National Football Foundation’s Annual Awards Dinner on Dec. 5, 2023 in Las Vegas.

Sports
Mountaineers hoping to continue stretch of quality play at No. 15 TCU
West Virginia has won two straight and three of four. On Tuesday night, the Mountaineers go for a season sweep of the Horned Frogs, who are likely to be without guard Mike Miles Jr., the Big 12 Preseason Player of the Year.
By Greg Carey
WVU Sports
3 Guys Before The Game - Tigers Toppled & TCU Preview (Episode 438)
The Mountaineers head to Fort Worth for a date with No. 15 TCU
By MetroNews Staff
Sports
Mountaineers benefit from Bell, Okonkwo stepping up against Auburn
Jimmy Bell had his second 15-point performance over the last two weeks, while James Okonkwo was a key factor in a third straight contest.
By Greg Carey
Sports
Photo gallery: Jefferson wins at Martinsburg, 94-77
By MetroNews Staff

Correctional Officers are Prisoners to Poor Pay
Abortion Issue Returns in WV
Can Steve Williams Give WV Democrats Hope?
The Jim Justice Traveling Tax Cut Show is Coming to a City Near You