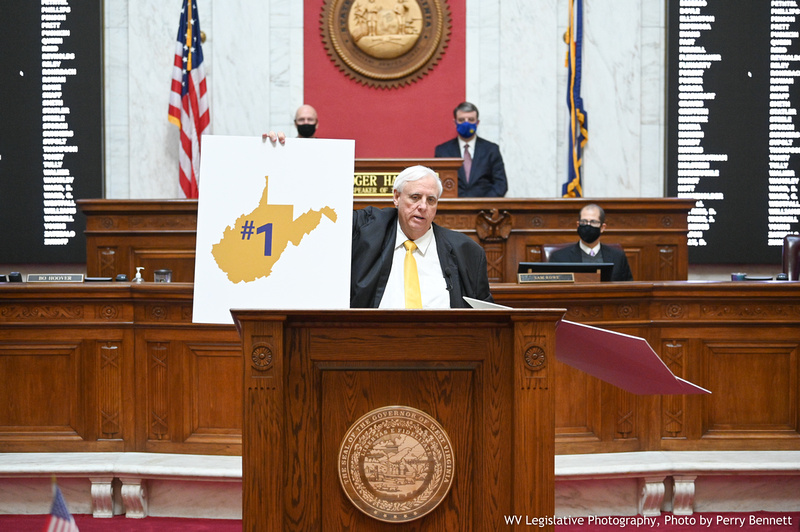 Gov. Jim Justice proposed a phase-out of the state’s personal income tax, which brings in about $2.1 billion a year for healthcare, education and more.

“Tonight, I am asking all of you to join me to repeal the income tax in the state of West Virginia,” Justice said during his annual State of the State speech.

The governor proposed making up the difference with several additional steps:

— He proposed an initial step of cutting the income tax for all residents except for the highest earners. “You cut theirs by a third, but you cut everybody else by half,” said Justice, who did not define those income levels.”

— Justice, whose family has coal holdings, proposed a tiered system on oil, gas and coal. This is a revisitation of a concept Justice backed in 2017. When profits are up, under the plan, companies would pay more. When profits are down, they would pay less. Justice did not say how this might affect overall state revenue collections.

— Justice proposed adding sales tax on cigarettes and soda “in trying to make us healthier and better — and that could be a source of revenue for us.” He didn’t specify how much.

— He proposed taxing professional services, but didn’t say which ones or how much. That could include economic sectors such as legal representation, accounting services, advertising, hair care or contracting services.

— He proposed a wealth tax — “a tax on those that are very, very well to do that can pay just a little bit extra.”

Finally, Justice acknowledged cuts would be necessary, describing about $25 million. “The cuts, in my opinion, would be very miniscule. You do not need to cut to the bone, but you do need to make some cuts.” He did not say what those would be.

Justice also proposed a flat budget this year and, to continue making up the gap, flat budgets for the next three years after that. Taking inflation into account, that would be a defacto cut. But, Justice said, “The growth alone would eliminate the rest of the balance of the income tax.”

It all added up to the governor.

“Imagine if I were to say we can cut our income tax in half, right off the get-go. We’ll have to pay another percent and a half on our consumer sales tax. If you’re not a smoker or you don’t buy soda pop, that’s it. For you, that’s pretty much it. We need to tier our severance tax on coal and gas. And oil.

“It is so miniscule it is unbelievable what I am asking you to do. And with all that, along the way, with a wealth tax, a luxury tax, that is also miniscule,” saying that could bring in $20 million to $30 million a year. “Then there’s that small, small level of cuts. What if I were to say to you, ‘That is our chance. The door is wide open for you, West Virginia.'”

The governor acknowledged being open to tweaks to the plan, but urged lawmakers to take it very seriously.

“It is the single biggest issue that you could possibly, possibly address,” he said. “You need to spend unlimited time addressing this issue.”

“Tonight, the governor made it clear that West Virginia’s time to take bold steps to secure our future is right now. We have been committed over the last four years to improving our state’s business climate, reforming our education system, and promoting all of the benefits our state has to offer,” said Blair, R-Berkeley.

“We now must take the next step, and that step is removing our state’s personal income tax. Governor Justice laid out a plan that will enable the Legislature to provide a tax cut to working West Virginians, and he’s done this while presenting the Legislature with a budget that does not increase spending over last year.”

The West Virginia Beverage Association was already out in opposition to the soda tax proposal.

“The governor’s proposal to increase the pop tax from 1 to 10 cents is absurd on many different levels,” stated Larry Swann of the beverage association.

“The governor’s proposal is a jobs killer for West Virginia. We respectfully ask the governor to reconsider his position on this matter.”

The West Virginia Working Families Party, a progressive political organization, panned the income tax proposal: “Justice confirmed the Republican goal to eliminate the state income tax that will shift the tax burden of the wealthy to the working and the poor by raising sales taxes on everyday purchases.”

Justice’s State of the State speech included other proposals as well.

And he again pitched an intermediate court of appeals, a mid-level judiciary that has been discussed in the Legislature for many years but never passed.

This was Justice’s fifth State of the State address and his first since being re-elected last fall.

Because of the ongoing coronavirus pandemic, it was very different from the others with social distancing precautions. Officials such as Supreme Court justices and executive officers were seated in the upper galleries. Justice recognized notables such as computer age heroes John Chambers and Brad Smith while they beamed in through Zoom.

Justice concluded by urging those in attendance and those watching broadcasts to continue striving for greatness. “God bless each and every one of you,” he said. “Thank you so much.”