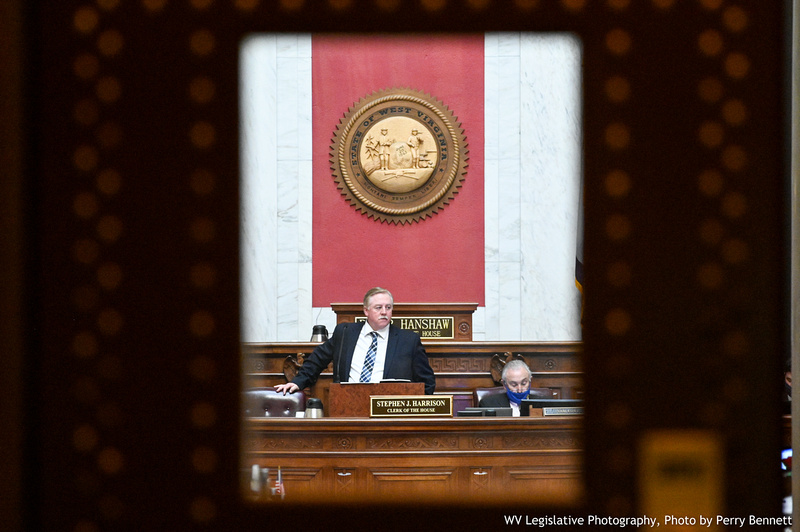 A House bill to cut the personal income tax by at least $150 million a year until it’s eliminated is on the edge of passage, while Gov. Jim Justice continues to sell a different plan to state and national audiences.

House Bill 3300, anticipated to eliminate the income tax over about a dozen years, is up for a passage vote on Friday.

No one expects that to be anywhere near the final legislative step. The Senate is likely to make changes. And Justice has made clear he prefers something closer to his own plan, which takes a 60 percent cut of the personal income tax right away, making up much of the money through sales tax increases and expansion.

“I’m not under the illusion that the Senate’s going to take our version and pass it as-is,” Delegate Jeffrey Pack, R-Raleigh, said today on “Radio Roundtable” on WJLS. But, “It’s a step in the direction we want to go.”

The House bill and the governor’s bill both aim to eliminate the personal income tax, but there are big differences.

The House version would cut at least $150 million in income taxes a year until it’s eliminated. That proposal does not contemplate any other tax increases to make up for the cut and has already raised questions about how to sustain government services with compounding income tax cuts over the long haul.

The governor’s would cut West Virginia’s personal income tax by 60 percent right away, while making up most of tax base with a variety of increases.

Pack said the governor’s bill did not have enough support to pass the House.

“I think if the governor’s bill had come out on the floor of the House, I’m entirely confident there’s no way that bill would have passed,” he said.

This dynamic may be puzzling to observers. Justice is a Republican, and both chambers of the Legislature have GOP supermajorities.

“My concern is, they knew they had a supermajority the day after the election. The session started late. There was plenty of time for the governor and the Legislature to get their ducks in a row,” Delegate Mike Pushkin, D-Kanawha, said this week on “580 Live” on WCHS Radio.

“It looks like we’ve got three competing plans from the governor, the Senate and the House.”

Justice made two stops in the Eastern Panhandle today to promote the plan while appearing near Beckley the prior day and in Morgantown the day before that.

To those who are against the income tax reduction, Justice said in Martinsburg, “You’re going to miss the godawfullest opportunity you’ve ever had, a hundred million to one.”

The governor added, “You may say, ‘Why don’t we do it gradually?’ First of all, nobody’d believe it. Nobody’ll believe it. Nobody’s going to come if they don’t believe it. Secondly, we have a spotlight of the world on us right now. Honestly, every national broadcast. You’ve seen television.

“Every single night, every single day, I could be on a national broadcast full time. Full time. Right now is our moment.”

The governor has also been selling his proposal to national outlets, including radio programs by Hugh Hewitt and Sean Hannity, as well as Fox Business.

“We are ready,” Justice told Fox Business. “We’ve got a strong economy, the state is right side up, and with this, it will take us to another level beyond belief.”

The outreach is being supported by a political organization newly-formed by former Senate President Bill Cole, a Republican who ran for governor in 2016 against Justice, who was a Democrat at the time. Cole owns car dealerships in southern West Virginia.

Justice told Fox Business that West Virginia has a real opportunity for population growth if the state can make a splash with income tax policy.

“I don’t mean that as a sales job from a governor’s standpoint — I mean that from my heart,” Justice said. “So really, I’m a business guy — I’m not a politician. I don’t want to be a politician ever.”

West Virginia citizens had an opportunity to weigh in on income tax policy during a House Finance Committee public hearing on Thursday afternoon.

The event focused on the House of Delegates proposal.

The bill outlines an annual cut of that amount, assigning the state Tax Commissioner to recalculate tax brackets each year to reflect a $150 million cut overall.

An assessment from the Division of Regulatory and Fiscal Affairs anticipates the first-year impact would be $31.9 million because of a difference between the calendar and fiscal years. That assessment also takes into account natural economic growth that would bring in more income tax collections year over year.

In addition to the $150 million annual cut after that, the bill would set up a “personal income tax reduction fund” that would fill up with other sources, including Lottery proceeds. This is meant to accelerate the overall pace of income tax reduction.

When the fund hits $400 million, it would shift $100 million of that to the General Fund “to provide a cushion for an additional permanent $150 million in personal income tax reductions.

So the income tax reductions could amount to as much as $300 million a year.

The fiscal note released this week anticipates a full phase-out of the personal income tax — a total of $2.1 billion — by fiscal 2035.

Most who spoke about the bill were against it.

“There are no triggers, no brakes. It just forces legislators into further and further austerity,” said Kelly Allen, executive director of the West Virginia Center on Budget & Policy. “Let’s be clear this is a tax shift, just like the governor’s bill.”

But she said that shift will come years from now when future legislators have to deal with the lost tax base.

“This is a major decision that must not be rushed,” she said.

Some speakers pointed to how little is still known about the possible effects. The personal income tax reduction fund would take lottery money, but there’s been no fiscal note going into detail about how that might affect bond ratings or programs funded through the lottery money such as Promise Scholarship.

“The fiscal note is full of zeros,” said Ryan Frankenberry, director of the West Virginia Working Families Party. “Working families have to crunch their family budgets every day. We’ve seen more details from deals made on the back of napkins.”

Others spoke in favor of the bill.

Jessica Dobrinsky, policy development associate at The Cardinal Institute, said the income tax cut will put money in the pockets of West Virginians. She noted that West Virginia has been last for many years in labor force participation rate.

“Why would we want to promote any policy that discourages work? We can do better,” she said. “States with no income tax grow more quickly and are magnets for opportunity.”

Reeves Kirtner, a vice president at Kindred Communications radio and a member of the West Virginia Broadcasters Association, objected to the expanded taxes on professional services, including advertising, in the governor’s bill. “We would be hampered greatly by new taxes,” he said.

But he spoke favorably about the House bill as an alternative.

“This is a time for West Virginia to shine. But we must do it responsibly,” he said.

Representatives of the West Virginia Chamber of Commerce spoke approvingly about the House bill and about the concept of reducing the personal income tax. The Chamber has critical about the taxes that would be increased in Justice’s proposal, and the governor has returned fire.

In this case, Chamber members were described as very positive about the potential impact the bill could have on the economy and for the state’s future.

“Our members support the goal of reducing and eventually eliminating the personal income tax in West Virginia,” said Brian Dayton, vice president of policy and advocacy at the Chamber. “This bill does not shift the burden onto other sectors of the economy.”