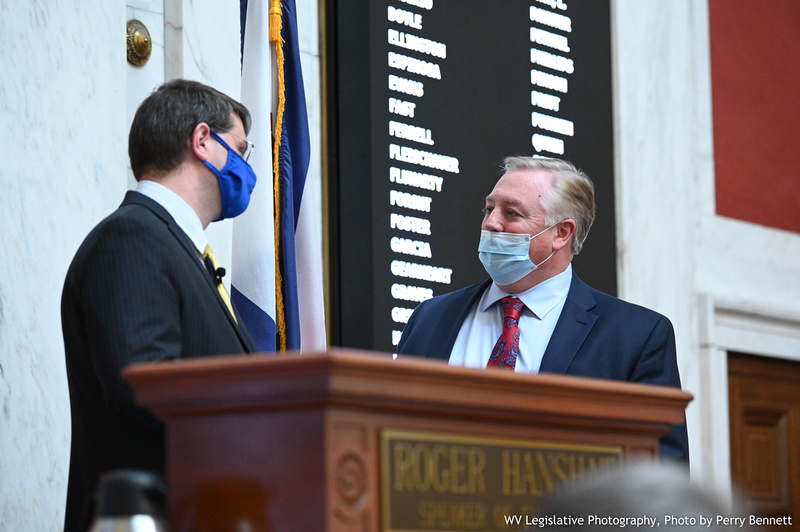 Delegates passed their version of a state budget today with bipartisan support.

The House’s budget bill passed 83-14 on Friday afternoon. It’s unlikely to be the last time delegates take this vote. The state Senate has a different budget plan lined up for passage early next week.

But delegates have structured the budget so that funding could be made up if the state winds up with a financial surplus at the end of this fiscal year, as it’s on track to do.

Some delegates expressed reservations about the cuts to the colleges — $18 million to WVU and $10 million to Marshall.

Delegate John Doyle, D-Jefferson, offered an amendment that would have assured funding for WVU and Marshall by taking money from the Medicaid surplus. Householder objected that would have put at risk money meant for the healthcare of vulnerable citizens, and the amendment was defeated.

“I think it sends a message of concern when people see our two largest institutions of higher education placed in the back of the budget in the surplus section even though we’re confident they will be funded,” Boggs said.

Cuts may be necessary because of legislation that may require revenue reductions, including $75 million next year from the House’s separate income tax reduction bill. That represents half of the annual $150 million income tax cut under the bill, based on going into effect halfway through the fiscal year.

The Senate is considering a budget that includes across-the-board 1.5 percent cuts to state agencies, as well as a $12 million cut to West Virginia University and a $6 million cut to Marshall.

The Senate’s budget does not anticipate making up those cuts through end-of-year surplus. They are just cuts.

The Senate budget leaves a $73 million unappropriated balance, seemingly to make way for its own income tax reduction.

Governor Justice has focused on the cuts to WVU and Marshall for criticism.

“We take a little hit at WVU and a little hit at Marshall,” Justice said today on MetroNews’ “Talkline.” “Well, that’s not really good either because we surely need our higher ed because they’re our job institutions and they’re leading our way.”

The governor, the Senate and the House haven’t seen eye-to-eye-to-eye on several issues lately.

The governor called for a “summit” at noon Monday to work out differences among tax proposals, although legislative leaders said they’d only heard of it secondhand.

And a conference committee of senators and delegates couldn’t work out differences Friday on a bill that would have limited the governor’s emergency powers.

Delegate Mick Bates, D-Raleigh, seemed to allude to some of those differences when he spoke in favor of the House budget.

“We’re not been treated real well by our colleagues down the hall,” Bates said, pointing west toward the Senate. “They have taken positions that are opposed to the posture of the House on several issues to this point.

“I support the chairman’s budget and the House’s budget. I ask that the body do so and that we defend our priorities and our position as we move forward in negotiations with the Senate.”

Boggs said that although he sees flaws in the House plan, its eventual funding of the two institutions wins his support.

“I supported the budget coming out of committee. It’s not everything I would like. But I believe the budget is worthy of my support even though it’s not perfect,” he said.

Referring to the Senate’s proposal, he added, “I’m concerned about what’s across the hallway.”