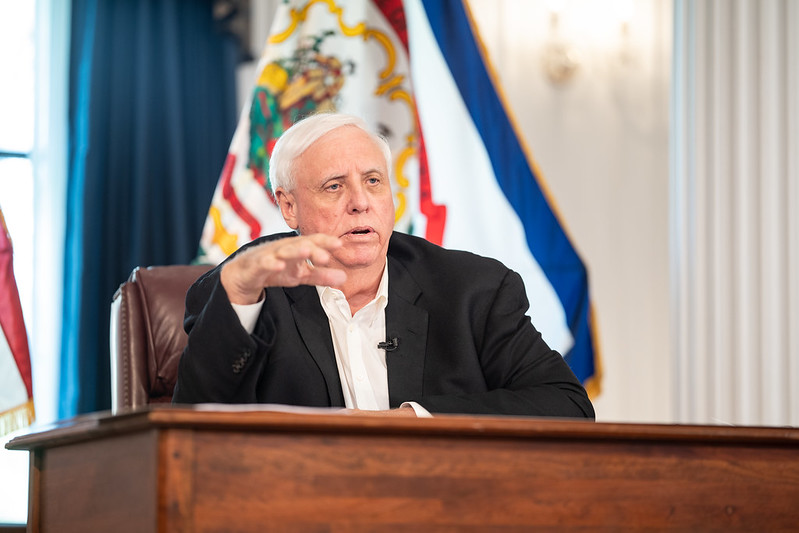 Gov. Jim Justice talks about a big tax bill at a briefing.

Gov. Jim Justice says he won’t give up on his big tax plan that was voted down 0-100 by the House of Delegates a day ago.

“I’m going to go out on the road immediately,” Justice said during a Saturday night briefing meant to address the end of the regular legislative session.

The governor reiterated his belief that a sharp income tax cut would make West Virginia enticing for people to move. He contends the move would result in significant population growth for the state.

But he said citizens may not see it his way yet.

“I’m telling you, when the voice of the people really hear this, they’re not going to go away quietly,” the governor said.

The governor has talked about a big income tax cut since the day after the General Election. He made that push the central point of his State of the State address. Then he had a series of town hall events to promote the cut.

Delegates have worried about how increasing sales taxes would affect West Virginia households and small businesses. The House’s Republican supermajority passed an earlier plan that cut $150 million a year in income taxes, anticipating a phase-out over about a dozen years, without the offsetting tax increases.

At midday Friday, Justice criticized the House of Delegates for not taking up the bill. He suggested they would just table it. “I would hate to be a delegate that is sitting on their hands,” he said.

A couple of hours after that, delegates voted it down 0-100.

“To be perfectly honest was a grandstanding kind of move,” Justice said tonight. “They are so proud to say the vote was 100 to goose eggs.”

He suggested many of those delegates actually voted against their true view of the bill.

“When politics gets going with the snowball going down the side of the mountain, it gets out of control,” he said. “We all know it’s physically impossible to think that a hundred of those folks — that there isn’t a goodly percentage of those folks are all on board. But when leadership is pushing and everything, it gets going downhill.”

House Speaker Roger Hanshaw on Friday said he hadn’t expected the complicated bill could pass during the 60-day session, given how late lawmakers received a bill and how far apart the chambers seemed. He was open to ongoing consideration, though, and said he would like further, rigorous examination.

“But we will not do it recklessly. We will not do this without some basis for the decisions we make. And a gut feeling and a positive reaction is not a basis on which to make any decision, much less a decision about half the state’s entire general revenue budget.”

The governor tonight reiterated his belief that delegates have been swayed by “out-of-state” lobbyists.

“I just think the out-of-state lobbyists drive a lot of what’s going on,” he said. “The lobbyists can become a real problem.

Justice said he would meet with those groups to try to talk through differences.

“I’ll call all those groups in and hope like crazy that we can get a general consensus of a path forward. And I’ll continue to meet with the House and the Senate and see if we can find a path forward,” he said.

“Once I see a path forward, I’ll call the session.”