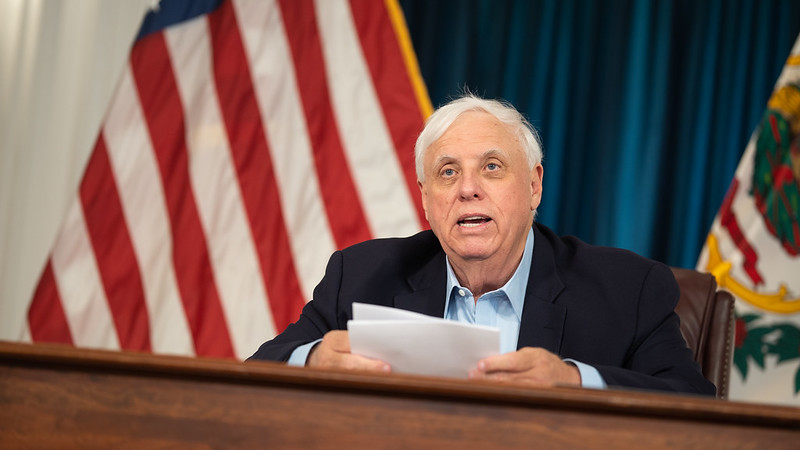 “We’ve got to have you back to work. America is all about work. That’s what’s made this great country,” Justice said during a briefing today. “For us to not be back to work, if you’re just taking advantage of these programs, I think this time is over. That time needs to end, and we need to move forward.”

West Virginia joins other states, including neighboring Ohio, in ending enhanced unemployment benefits instituted as the economy faltered during the covid-19 pandemic.

His announcement drew criticism that the economy is not yet back to normal — and that while some service industry job openings may be returning all at once, other skilled positions are not yet back.

“Governor Justice’s decision to follow other states off the cliff and opt out of federal unemployment benefits is neither based in fact nor is it likely to succeed in getting West Virginians back to work by force,” said Kelly Allen, executive director of the West Virginia Center on Budget & Policy.

“In reality, there are still 1.2 unemployed workers for every job opening, meaning that cutting off federal benefits harms West Virginians for whom there will be no job option. And while April’s job numbers were disappointing, low-wage sectors like the restaurant industries were among the fastest growing – the opposite of what you’d expect to see if generous unemployment benefits were keeping people out of the labor force.”

The governor said that would apply to thousands of West Virginia residents who lost jobs or their ability to be self-employed during the pandemic.

His decision will halt an additional $300 payment to unemployment compensation recipients, stop benefits for self-employed or part-time workers who wouldn’t usually qualify, end an extension of benefits for people whose regular benefits have exhausted, and stop an additional $100 benefit for certain people with mixed earnings.

“Now there’s got to be some people out there who are still really struggling, and I’m not talking to you. But I’m talking to the overwhelming majority of those other folks,” Justice said.

“West Virginians will have access to thousands of jobs, right now, and we need everybody back to work.”

The U.S. Bureau of Labor Statistics most recently showed a ratio of 1.2 unemployed people for every opening.

The job market remains particularly hard for skilled workers who have training for specific fields and for women who may not have reliable childcare, said Delegate Kayla Young, D-Kanawha.

Young, a small business owner, said a safety net remains necessary for many unemployed people as the economy straightens out. She noted that a requirement for unemployment claimants to seek actively seek work is returning June 1.

“This is a labor problem that is going to fix itself. It’s just starting to,” she said. “So why not let it play out?” she said.

“Those jobs require new industries to come here and investments in our infrastructure. These things take time. It’s not something that just fixes itself in 30 days. It takes time for the labor force to work itself out. I don’t think it takes years, but months.”

Workforce West Virginia put out a statement this afternoon saying career specialists are available to help job seekers match with new employment, identifying possible training programs that may result in a changed career path or an apprenticeship program with a competitive wage while learning a new trade.

Job seekers can schedule a live call with someone from WorkforceWV here.

“Workforce West Virginia stands ready to help West Virginians return to the workforce,” said acting WorkForce WV commissioner Scott Adkins. “We know last year was incredibly difficult for many workers in West Virginia and we want to remind folks we are here for them.”

West Virginia lawmakers asked about the employment market during interim meetings earlier this week. Questions were addressed to Chris McCauley, director of unemployment for Workforce West Virginia. The state’s unemployment rate dropped to 6.1 percent in March, he said, down about .8 percent from the prior month.

“Do you have any numbers on how long our average person is on unemployment right now, as compared to what would be normal?” asked Senate Finance Chairman Eric Tarr, R-Putnam.

“Out in my district and beyond, I’m seeing a lot of help wanted signs out there. I talked to a gentleman yesterday who said he was 25 people short for his business. I had a restaurant that’s a pretty common restaurant, a national chain restaurant, that was closed during lunch because they didn’t have enough staff to come in and work it. I perceive that there’s a lot of jobs available.”

McCauley responded, “We hear the same concerns and same complaints,” describing another restaurant that had to shut down because it couldn’t find a cook. But he said he’d need to follow up with numbers. “It’s definitely more than the normal.”

Gil White, executive director of the National Federation of Independent Businesses, said employers are having trouble finding workers. He advocated for ending the enhanced unemployment benefit.

“It’s a huge problem,” White said. “If you look where we were last year and the covid limitations that were forced on small business owners, and now a year-plus later we’re dealing with a whole different set of problems and that is finding employees willing to come back to previous jobs, which is very challenging.”

White suggested the enhanced unemployment benefits provide a disincentive for returning to work, although he agreed the full picture is complicated.

“Trying to prolong getting back into the workforce is just a disservice across the board,” he said on MetroNews’ “Talkline.” “I don’t think anyone ever thought that would be the problem today we’d be dealing with when these programs were put in place at the federal level.”

Gil White, Executive Director of the National Federation of Independent Businesses in https://t.co/rn6maOBVPd., speaks with @HoppyKercheval about the worker shortage. WATCH: https://t.co/yCFQ3nDJuy pic.twitter.com/cQt9ANW2kI

The governor said his administration is strongly considering a matching bonus for people who re-enter the workforce with employers offering such bonuses. Justice promised more details Monday.

“We’re having a lot of businesses that are willing to step up. And we’re looking at some kind of bonus that could really incentivize our folks to go back to work and really be able to help with this shortfall they may have to endure just a little bit here,” Justice said.

He described the state-funded bonus as a match for an employer offering its own $500 bonus.

“The employee gets a thousand bucks to go back to work if – if – you stay on the job a minimum of 90 days,” Justice said.

But, “If you’re working now and you just transferred jobs and go somewhere else we’re not interested in that. We’re interested in getting these folks back here that are on the sidelines right now.”