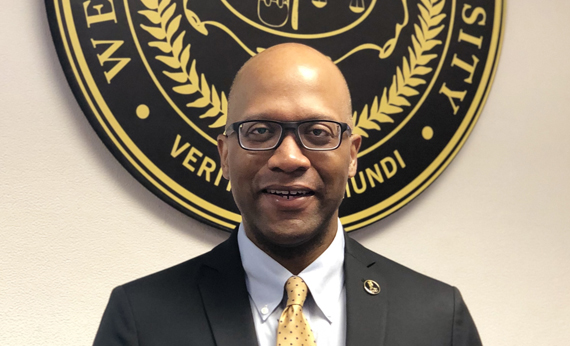 INSTITUTE, W.Va. — Ericke Cage has been in one of the top leadership positions at West Virginia State University since the July 30 resignation of president Nicole Pride and now he is officially in the president role.

Cage was named interim president in a recent meeting by the university’s Board Of Governors. He had been serving as the university’s chief operating officer, managing the day to day operations of the university since Pride’s resignation. Cage came to Institute in mid-July, being named vice president and chief of staff, serving as aide and adviser to Pride.

Pride submitted her letter of resignation to the board after less than one year on the job. She had been under fire after several members of her cabinet signed a letter of no confidence and submitted it to the BOG earlier that month.

“Condescending and abusive dialogue are common in exchanges with Dr. Pride,” the Cabinet members wrote. “Her harassing dialogue and bullying behavior have contributed to a ‘hostile work environment.’ Her executive leadership team has continued to dwindle as a result of a psychologically unsafe and chaotic work environment.”

“We’ve come to a tough time at the university with leadership transition and COVID. It’s about taking a step back and bringing the community together to champion our core values,” Cage said.

Cage said his other immediate focuses are external engagement and making sure WVSU is telling its story to the state. He also said his administration will take a ‘deep dive’ into the university’s operations, policies, and processes. He said leaders there must do everything to optimize the effectiveness of the university.

“This is an incredible community,” Cage said. “A community of faculty, staff, students, and alumni who care deeply for our students and the mission of this university. I am ecstatic and excited to be here in Institute.”

When asked by MetroNews if he would be interested in applying for the permanent role of president, Cage responded, “I’m focused on the work of being an interim president of the university. I haven’t thought about that because there is so much work to do here.”

Board Chairman Chuck Jones told the Charleston Gazette-Mail that the university has no timeline in place to hire a permanent president. He also said there’s no written contract yet between the board and Cage.

Cage told MetroNews he always envisioned himself being a university president and this is a great opportunity.

“As they say when opportunity knocks, it’s important that you’re ready to open that door. I think all of my experiences have prepared me for this moment in time,” Cage said.