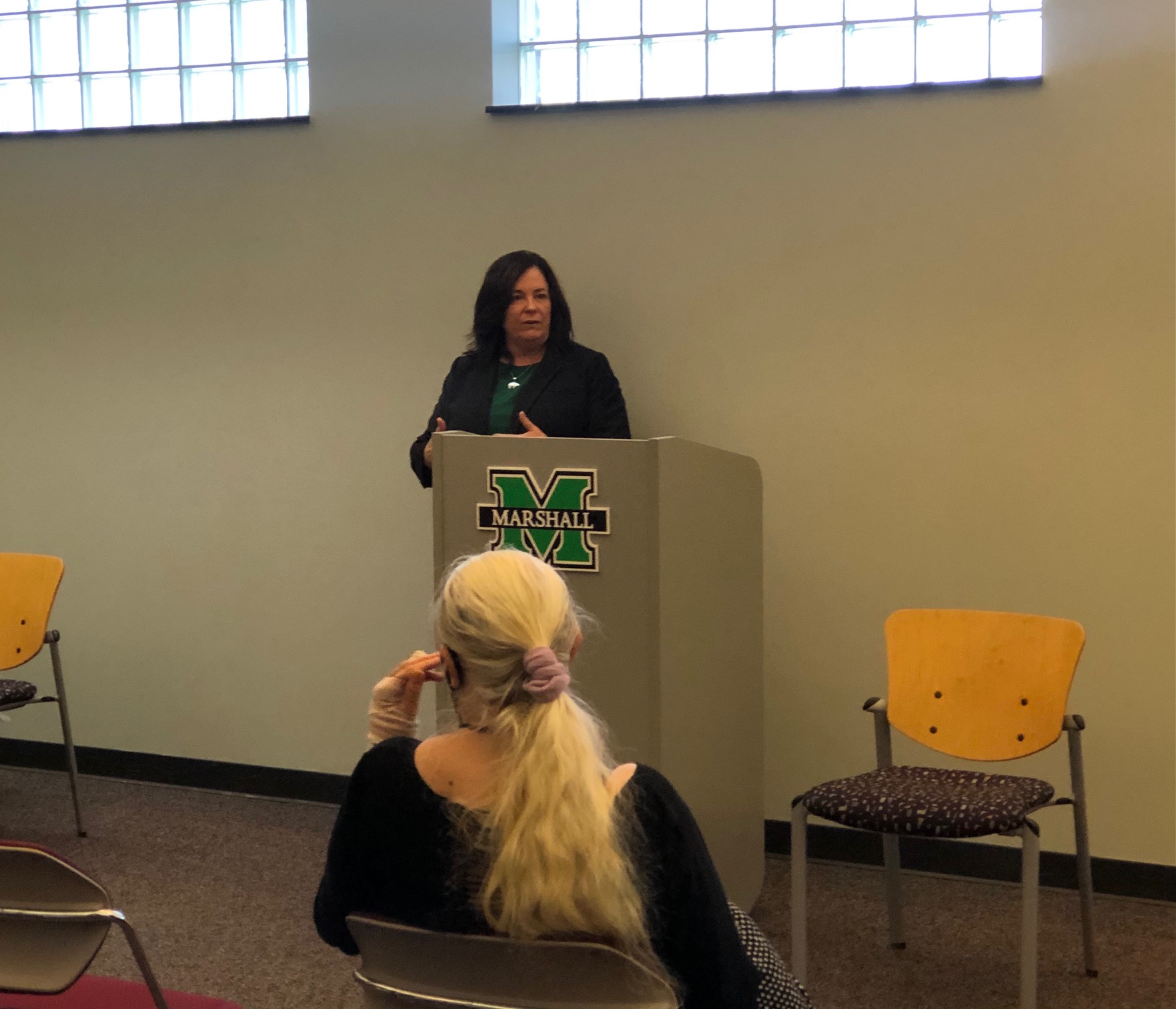 Dr. Robyn Hannigan, the first finalist for the Marshall president position to visit campus, speaks on Monday in South Charleston.

SOUTH CHARLESTON, W.Va. — The first of five candidates for the Marshall University president’s position is busy attempting to make an impression on the institution’s community.

Dr. Robyn Hannigan, provost of Clarkson University in Upstate New York, visited Marshall’s South Charleston campus Monday as she is the first finalist to visit the Mountain State this week as officials consider the successor to President Jerome Gilbert.

Gilbert previously announced he will leave the institution when his contract expires next July.

“As your president, I am here and I am and present. I will act on behalf of the institution, bringing everything I know about higher education and about entrepreneurship, innovation, economic development to help us be successful,” Hannigan told MetroNews as her message to the university community.

Hannigan spoke and answered questions from the South Charleston campus leadership and community for nearly 45 minutes on Monday morning, before heading to Huntington. Hannigan said she had planned to be at a community event in Huntington late Monday afternoon before having dinner with the Board of Governors.

On Tuesday, Hannigan plans to meet with faculty, staff and students on the Huntington campus.

She told the crowd on Monday that she was attracted to Marshall because of its dedication to the community and inclusion. She also viewed Marshall as being ambitious and hungry to grow.

“This institution is centered on access and opportunity,” Hannigan said.

Hannigan, who was also the founding dean of the School for the Environment at the University of Massachusetts Boston before going to Clarkson, described Marshall as being nimble and ready to expand programs quicker than other institutions.

She said that will give Marshall an opportunity to define who it is in a way that is less restrictive.

She said two examples of innovation and expansion for Marshall can be seen in the Kanawha Valley in the South Charleston campus and the Bill Noe Flight School at Yeager Airport. Hannigan visited the airport Monday morning and told MetroNews she envisioned many things that could be done.

“Going to Yeager airfield this morning (Monday), ideas were popping off all over the place. What we could go with the Air Force and Air Force ROTC program, what we could do for aerospace engineering. All kinds of stuff can be done,” she said.

Other goals she expressed she would attempt to achieve at Marshall is to increase diversity among staff, create a culture to support success, focus on a return in investment for students, and creating more partnerships in the Kanawha Valley.

Her background in innovation includes several start-up companies founded with her students. She detailed those businesses to the crowd at the South Charleston campus which include Hyphenated Solutions, GeoMed Analytical, and OFT Labs.

A “Campus Visit Feedback Form” for Hannigan can be found on the Marshall University presidential search page from 8 a.m. to midnight on Tuesday.

Other candidates visits include:

The meetings will also be live-streamed at https://livestream.com/marshallu.

The Board of Governors is expected to make its final selection at its regularly scheduled Oct. 28 meeting.