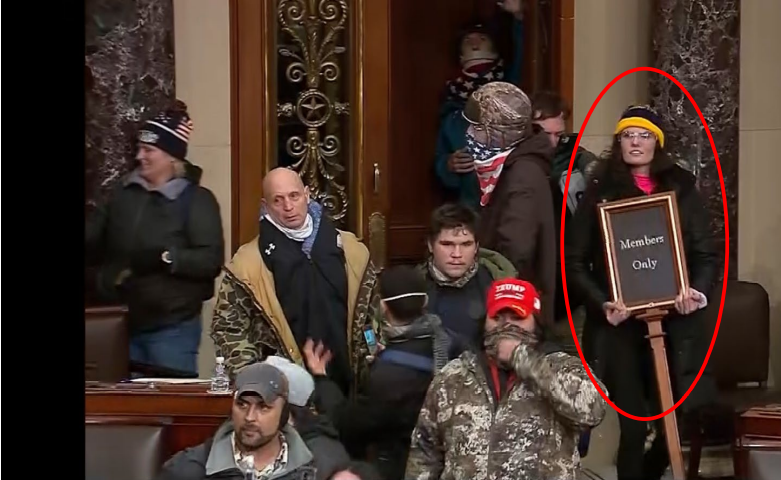 Gracyn Courtright is visible in security video from the U.S. Senate floor.

A federal judge sentenced West Virginia resident Gracyn Courtright to one month in jail for her actions inside the U.S. Capitol on Jan. 6, accepting her explanation that she didn’t mean to participate in an insurrection but also saying that every participant in a mob makes a dangerous situation worse and more complicated to control.

Courtright, a 24-year-old Hurricane resident, also has to pay $500 restitution for damage to the Capitol and serve 60 days of community service. After she serves the jail time, possibly at Alderson in West Virginia, she will be on supervised release.

She surged into the U.S. Capitol on Jan. 6, wandered around with a U.S. Senate “Members Only” sign, walked all the way onto the evacuated Senate floor and then left the building after about 24 minutes, pumping her arms in the air.

None of that was in dispute as Courtright pleaded guilty to a single misdemeanor count of unlawfully and knowingly entering and remaining in a restricted building and grounds.

Courtright apologized to the court and asked for lenience. “I’m sorry,” she began. Then, though, the hearing had to be halted for a few minutes so she could maintain composure. At last, she read written remarks out loud while seated.

“If I could take back any of my life it would be from my actions on Jan. 6,” Courtright tearfully told the judge. “I know my actions have caused so much shame for the most important people in my life. I’m sorry for the embarrassment I have caused.”

‘I was just following the crowd’

Judge Cooper explored her motivation while determining the appropriate sentence. Federal prosecutors had recommended six months in jail. A presentencing probation report and Courtright’s own attorney had said one month would be appropriate.

“My main questions relate to what were you thinking. Why did you do what you did?” Cooper asked.

Courtright told him, “I went into the Capitol because I was just following the crowd.”

Her lawyer, Thomas Abbenante, provided a more detailed explanation. Courtright wanted to see President Trump’s historic remarks that day, the lawyer said, and she was excited when she was seated on the third row.

“She didn’t come from Hurricane, West Virginia to subvert democracy or participate in any overthrow of the government,” Abbenante told the judge. “She was going to see President Trump.”

Judge Cooper took that in context: “Do you know how many Jan. 6 defendants stand up and tell me ‘I had no intention of overthrowing the government but I just got caught up in the moment?'”

Weeks earlier, the president had tweeted to his supporters, “Be there. Will be wild!”

On Jan. 6, the audience at the Ellipse would hear Trump say, “We fight like hell. And if you don’t fight like hell, you’re not going to have a country anymore.” As the president concluded his speech, he said, “I know that everyone here will soon be marching over to the Capitol building to peacefully and patriotically make your voices heard.”

Courtright’s lawyer said she reacted: “She got really excited. She got a very close seat. She saw the president. When everybody got up and he said go to the Capitol, she went and marched.”

Courtright’s interview with prosecutors indicates she saw people carrying a large flag and joined in to help carry it, winding up at the Capitol and waiting in line to go inside.

Prosecutors say she walked in while scuffles with officers continued nearby and that she stepped over broken glass. The sentencing report from prosecutors suggests Courtright’s priority was looking for a place to charge her cell phone.

Her lawyer didn’t disagree. “We could see there was broken glass. A protester to her left banging on one of the doors. She’s taking  a video. It’s ridiculous. I don’t know what was going through her mind. But that’s what she was doing,” Abbenante said.

Over about 24 minutes in the Capitol, she took videos and selfies, picked up a Senate “Members Only” sign and wandered around with it, and wound up on the Senate floor. Security cameras showed Courtright was inside the chamber about a minute, prosecutors said, one of only about 50 or 60 people to go there. She was there about the same time as Jacob Chansley, known as the QAnon Shaman.

“I didn’t know what the room was that I was in,” Courtright told the judge.

Cooper alluded to her “cluelessness” as he responded.

“I’ve concluded that you didn’t know where you were or the significance of what was going on or why it was such a serious affront to democracy to intrude or denigrate the chamber the way people did,” the judge said.

“That said, I don’t buy necessarily that you were trying to find a place to charge your cell phone. A Starbucks would have done the trick.”

A dangerous place to be

Prosecutors were asking for a longer period in jail because of Courtright’s early comments on social media (“Infamy is just as good as fame. Either way I end up more known. XOXO”) and because of her presence on the Senate floor.

“Even if Ms. Courtright only stepped onto that floor for a minute, no rioter acts in a vacuum,” federal prosecutor Rachel Fletcher told the judge, saying each person who entered the Capitol complicated the efforts of police to control the mob.

Courtright’s attorney, Abbenante, described her as a naive participant who intended no harm. “Foolish young lady. Didn’t even vote in the election. Had no political agenda.”

Hundreds of people face charges from the breach of the U.S. Capitol on Jan. 6. They are being processed in a court system still operating under coronavirus precautions.

Judge Cooper led Courtright through some of the timeline of that day, asking if she knew how serious it was.

He noted her first steps into the Capitol at 2:40 p.m. The judge said protester Ashli Babbit was killed at 2:42 p.m. after being shot by a Capitol security officer as she was climbing through a shattered window in a barricaded door just outside the House of Representatives.

“That could have been you if you had gone through a different door, followed the crowd in a different direction. That’s why it was such a dangerous place to be,” the judge said.

“Was it cool to have been there?” Cooper asked.

‘This has changed me completely’

Courtright had been working toward her final semester at the University of Kentucky, but was suspended. Her comments to the judge reflected worry about her future, including whether she will be able to successfully pursue employment, considering the damage to her reputation.

“My parents didn’t raise my to be a trespasser on somebody else’s property. I have so much shame from this,” she said. “I will never be the same girl again. This has changed me completely.”

Cooper concluded the hearing by saying to Courtright, “I tell many of my defendants they should not be judged by the worst mistake they make in their life. I hope that applies to you and that you will be able to overcome some of the byproducts of what you have managed to get yourself into.”