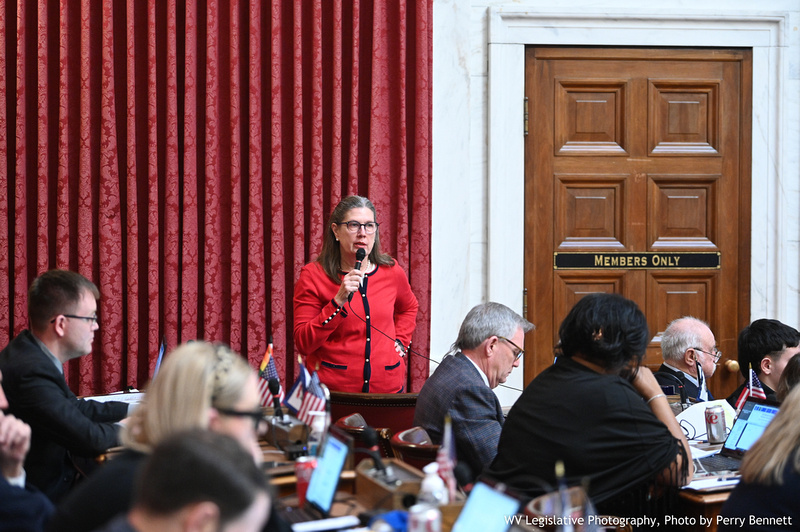 West Virginia lawmakers have been wrestling with whether the state should stand by its 1972 ratification of the Equal Rights Amendment.

The wording of the proposed amendment to the United States Constitution is short: “Equality of rights under the law shall not be denied or abridged by the United States or any State on account of sex.” But the history and current status is complicated.

The amendment never went into effect because of the slow pace of ratification by the states. But the situation has changed in recent years as states like Virginia have finally, seemingly pushed the measure across a requirement for three quarters of the states, 38, to approve it.

But ratification was up against a 1979 deadline that was extended to 1982. So national debate is focusing on whether the deadline could be set aside. This hot potato is in the hands of the U.S. Archivist.

The other significant factor is the changing politics of many states over the decades that have passed.

West Virginia’s then-Democratic majority ratified the Equal Rights Amendment on April 22, 1972. But the state has swung Republican over the past few years.

On Friday, without discussion or debate, a majority of West Virginia senators voted in favor of a resolution clarifying that the original ERA deadline has come and gone.

The lead sponsor of SCR 44 was Senator Donna Boley, R-Pleasants, who has served so long that at one point she was the chamber’s only Republican. All 23 GOP senators, including three women, sponsored the resolution.

It asks for official recognition that “after March 22, 1979, the West Virginia Legislature, while in agreement women and men should enjoy equal rights in the eyes of the law, should not be counted by Congress, the Archivist of the United States, lawmakers in any other state, any court of law, or any other person, as still having on record a live ratification of the proposed Equal Rights Amendment to the Constitution of the United States.”

Although there was no debate on the Senate floor on Friday, pushback started later that day.

“It is absolutely ridiculous that equal rights are being debated still in 2022,” Belinda Biafore, chairwoman of the state Democratic Party stated to media later Friday. “Women are the majority in West Virginia and Republicans in the Senate are showing us exactly how little they think of us.

“West Virginia is better than this. I can’t believe this even still has to be said, but women should be treated equally under the law and that should not be up for debate.”

This morning, as a matter of process, the House of Delegates was ready to receive the resolution from the Senate.

Delegate Shawn Fluharty, the minority whip, rose and made a motion to refuse to receive the Senate’s message about SCR 44.

“Friday, the state of West Virginia made national news for all the wrong reasons again,” said Fluharty, D-Ohio. “It’s a stain on our state, a stain on our country for us to even be taking this up. Yet here we are, moving this forward in the House.”

Delegate Paul Espinosa, the majority whip, then rose and said he needs more time to consider the state’s position. He suggested voting down Fluharty’s motion would allow the resolution to be sent to committee where it could be more thoroughly considered.

“I’m not really familiar with this legislation contained in this report,” said Espinosa, R-Jefferson.

“If we want to have this legislation go before the appropriate committee so we can better understand it, then we would vote against the gentleman’s motion?”

More delegates then weighed in.

Delegate Dianna Graves, R-Kanawha, said she agrees women should be treated equally under the law. “To me, it’s disgusting that in this day and age we still have to debate the merits of that,” she said.

But Graves drew a link between the provisions of the Equal Rights Amendment and the abortion policies that often dominate national politics. Among the groups pushing against recognizing the ERA is the National Right to Life.

“The reality of what is in this resolution – the ERA had a time limit in it. There was a time limit as part of that ratification, and that time limit expired,” said Graves, who was among the sponsors of a 2020 House resolution in support of an extension to ratify the Equal Rights Amendment.

Today Graves concluded, “We should allow this to go through the committee process.”

Delegate Barbara Fleischauer, D-Monongalia, contended the connection to abortion policy is a red herring. She said it’s a shame that in 2022 state leaders are even debating a resolution meant to assure the genders are treated equally under the Constitution.

“This resolution is a slap in the face for all the people who work for equal rights. This is trying to make a technicality out of something that is basic,” Fleischauer said.

Delegates voted 18-75, largely along party lines, against Fluharty’s motion to refuse to consider the Senate resolution.

The resolution then was assigned to the House Rules Committee, which is a group of leading delegates from both parties who sometimes gather before floor sessions to make decisions about what legislation will be considered each day and what may be pulled from the agenda.

Legislation is sometimes parked in Rules for complications to be worked out or as a kind of purgatory, but the intent isn’t yet clear in this instance.

Fluharty, right before the vote, asked what aspect of support for the Equal Rights Amendment would be need to be worked out in committee.