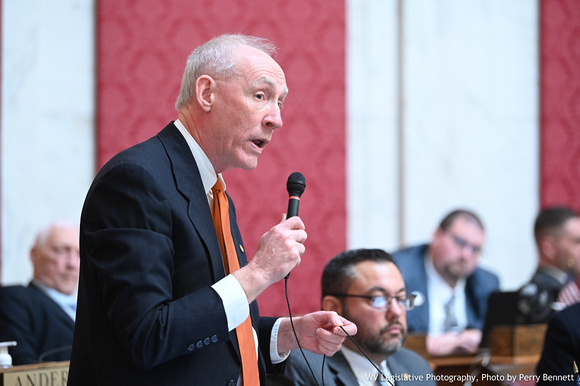 Delegates passed a bill that would ban most abortions in West Virginia after 15 weeks, rejecting a proposed amendment to add exemptions for cases of rape or incest.

The bill passed 81-18 after lengthy debate. It now goes to the state Senate. Lawmakers returned in the late afternoon and passed related legislation establishing a state policy against transporting and selling aborted fetal organs.

“If it was up to me, we would ban it outright, but that’s not the bill before us,” said Delegate Adam Burkhammer, R-Lewis.  “For those who think this bill goes too far, I believe it doesn’t go far enough.”

West Virginia’s proposed policy would be in line with the Mississippi law under review by the U.S. Supreme Court. The state is one of many examining changes to their abortion laws while anticipating a ruling by the Supreme Court later this year.

With a conservative supermajority holding pro-life positions, the bill was all but certain to pass. One big remaining question was whether delegates would include an exception for rape or incest.

Delegates also answered that question by voting down a proposed amendment to include those exemptions, 21-78.

Delegate Lisa Zukoff, D-Marshall, proposed that amendment in the House Health Committee, then in the House Judiciary Committee and finally on the floor. “I feel strongly enough about this that I want to bring this amendment before all of you today,” Zukoff said.

She said the amendment would preserve an option for underage victims of rape or incest, saying “These are children I’m asking you to take into consideration here today.”

“I offer this amendment to protect the girls and women of West Virginia who are impacted negatively by nonconsensual rape and incest that’s committed with force and violence and traumatizing women who are impacted,” she said.

Delegate Kayla Kessinger, R-Fayette, rose to say she too is appalled by violence against women. She urged delegates to share her support for bills to “increase penalties on men who think it is OK to take women’s bodies and use them for their own pleasure.”

But Kessinger urged rejection of the amendment. “I believe circumstances surrounding conception should never determine the value of human life,” she said. “This is a child that is being carried in the womb of an individual.”

Once most delegates voted against the amendment, they turned their attention to the main bill.

West Virginia is one of several states swiftly acting in anticipation of the coming Supreme Court ruling on Mississippi’s law establishing a statewide ban on abortion after 15 weeks. That’s weeks earlier than what Roe vs Wade established, with viability at 23 or 24 weeks — or longer in cases where the patient’s life or health is at risk.

Delegate Kayla Young, D-Kanawha, noted the similarities to the Mississippi law while speaking against the bill.

“I do know this is the exact language of the Mississippi law. What are we doing? Copy, paste, legislate,” she said.

“I don’t know why we keep chipping away at abortion. If you really wanted to ban it, you would. You’ve got the votes. But that’s not what we’re doing. We’re just cutting it to 15 weeks. I don’t know why. I’m a no. Thank you.”

Young asked some of her fellow delegates for a better explanation of why 15 weeks should be deadline for a decision.

In response, Delegate Ruth Rowan, R-Hampshire, said”At 15 weeks the baby begins to feel pain. The baby has lips, eyebrows, eyelids. If there’s intrusion like a light peering in there, the baby will move away from the light.”

“Why not ban it altogether? Why 15 weeks?” Young asked.