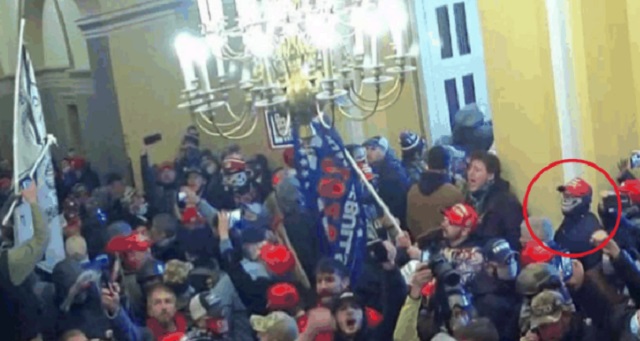 A Martinsburg man associated with the Proud Boys organization has pleaded guilty over surging into the U.S. Capitol on Jan. 6, 2021.

Jeffery Finley entered his guilty plea Wednesday in U.S. District Court for the District of Columbia. Documents entered in his case describe planning and interactions with the larger, loosely-knit Proud Boys organization.

The Proud Boys are often identified as a far-right extremist group. During a debate in September, 2020, when asked to denounce militia groups, President Trump told members of the Proud Boys to “stand back and stand by.” Leaders of the Proud Boys face conspiracy charges from Jan. 6, and the charging documents for Finley describe interactions with some of them.

Finley is admitting guilt to entering and remaining in a restricted building or grounds.

That could result in a maximum of one year in prison, a fine of $100,000 and supervised release of no more than a year. He’ll also have to pay a fine of $500, determined to be his share of about $1,495 million in damage to the Capitol.

Finley had no prior criminal convictions, and the plea agreement suggests he is likely to be sentenced to up to six months in prison. He accepted the terms of the agreement, signing a section that specifically says, “I am pleading guilty because I am in fact guilty of the offenses identified in this agreement.”

Hundreds of people now face charges from the breach of the U.S. Capitol on Jan. 6.

Finley’s statement of offense identifies him as “president of a West Virginia chapter of the Proud Boys.” The court filing goes on to specify “each chapter is anonymous, and as president of his chapter Finley was the highest ranking of his men.”

Documents filed in federal court indicate he joined an encrypted messaging group called “Boots on the Ground” on Jan. 5 for Proud Boys members planning to attend the events in Washington, D.C.

The morning of Jan. 6, according to the federal court documents, Finley met up at the Washington Monument with other Proud Boys from his chapter and others from across the country. All had been instructed, through the messaging group, to avoid wearing the Proud Boys colors of black and yellow.

Federal investigators identified Finley through video footage and still photographs following Jan. 6, according to the charges originally filed in his case. His location was further determined through records related to his cell phone.

Images of Finley that day show him in a blue suit, black shirt, red hat and glasses. He can be seen wearing a wired earpiece.

Investigators say he surged through a pedestrian gate and onto the Capitol grounds. “To Finley, there appeared to be a coordinated effort to tear the barricades apart,” federal prosecutors wrote in his statement of offense.

By the time cell phone video captures his image again on the upper west terrace of the Capitol, Finley has put on a face covering with a skull design.

Finley enters a door on the west side of the Capitol building about 2:54 p.m., this time shown on security camera. “While doing so, Finley understood that law enforcement did not want people to go inside the Capitol,” according to the federal filings.  He entered about 2:55 p.m.

He walked around the Capitol, took a photograph of himself near an office, then left the Capitol.

Shortly after 5 p.m., according to the federal filings, Finley posted a video message for other Proud Boys, describing with some profanity that he had taken pictures with his peers and that he was proud. He also described the security measures taking place, saying “we literally can’t get back in” and, with more profanity, “crazy, crazy lockdown. If you guys come out, you’re not getting back in. That’s 100 %.”

Investigators corroborated the identification of Finley through a search warrant served on Google, revealing that a mobile device associated with Finley’s Gmail address was present at the Capitol that day. Similarly, a search warrant served on AT&T showed that Finley’s mobile phone pinged off a cell site that provides service for an area including the interior of the U.S. Capitol building.

Finley had used the phone to exchange at least one message with a member of his Proud Boys chapter, advising the member to join him at the Capitol, according to federal filings. At 2:24 p.m. Finley also posted the message “On capital” to the “Boots on the Ground” encrypted message for members of the Proud Boys.

The federal filings suggest Finley took some measures to obstruct the investigation, deleting his social media accounts and deleting photos and videos of himself and other Proud Boys at the Capitol. He wrote in another encrypted message, “Deleted all photos I may have had, advised my boys to as well. No talks about dc on telegram whatsoever and gathering #s as we speak.”

He was charged originally on March 21, 2021, with two counts: being in a restricted building without lawful authority and engaging in disorderly conduct in any of the Capitol buildings.

Several more West Virginians face charges from that day’s events. They include George Tanios, a Morgantown sandwich shop operator accused in the assault of three Capitol police officers with pepperspray, former state Delegate Derrick Evans of Wayne County, who resigned after being charged, and college senior Courtright of Hurricane.

Courtright has served one month in federal prison in Philadelphia and was released last week.

Evans pleaded guilty earlier this month to a civil disorder charge. A sentencing hearing has been set for 12:30 p.m. June 26.

Tanios, is set for trial June 6. Tanios is accused of collaborating in the assault of U.S. Capitol police officers with pepperspray. The trial could be delayed after a recent filing on behalf of his co-defendant, Julian Khater, indicating serious negotiations about a plea agreement.