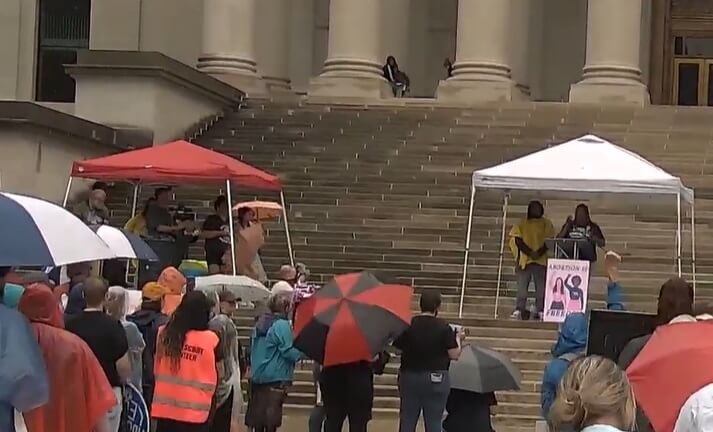 Delegate Danielle Walker speaks at a rally for abortion rights at the state Capitol.

The rally was a response to the U.S. Supreme Court’s ruling that overturned Roe vs. Wade’s federally-guaranteed right to abortion, leaving policies to the states.

Several of the speakers, including Walker, told their personal stories of abortion. “I will fight for the right to abortion,” Walker said.

Walker urged those who attended Saturday’s rally to take several steps to influence the course of events.

“Get registered to vote. Volunteer with a campaign. Make those donations,” Walker said.

Introducing a number of candidates who support abortion rights, Walker urged the crowd to vote for them and against their opponents.

A West Virginia law from the 1800s making abortion a felony is now believed by all sides to be in effect. West Virginia’s only remaining abortion provider has stopped, saying the risk of prosecution is too great.

An injunction hearing over West Virginia’s law is set for July 18 in a Kanawha County courtroom. Meanwhile, the state Legislature has been discussing what, if anything, to do about abortion policies in West Virginia but no course is clear yet.

Both West Virginia’s Attorney General and those suing over the law agree it could be interpreted to apply not only to medical providers but also to people seeking abortions.

Elected officials have talked generally about a special session to change or clarify West Virginia’s abortion law, but there has been no specific disclosure of a timeline or policies to be considered.

Gov. Jim Justice, a Republican, said on Friday that West Virginia’s abortion laws should be revised but not until legislators and lawyers are clear about what to do.

Loree Stark, legal director for American Civil Liberties Union of West Virginia, told the crowd at the Capitol on Saturday that the state law is “not only archaic, it’s cruel.”

“The statute itself is so broad, it’s almost impossible to determine what conduct it criminalizes,” Stark said.

Stark said the lawsuit is among several concrete steps, including political organization, that those in the crowd could support. “The fight for West Virginians starts here in West Virginia and is on the ground.”