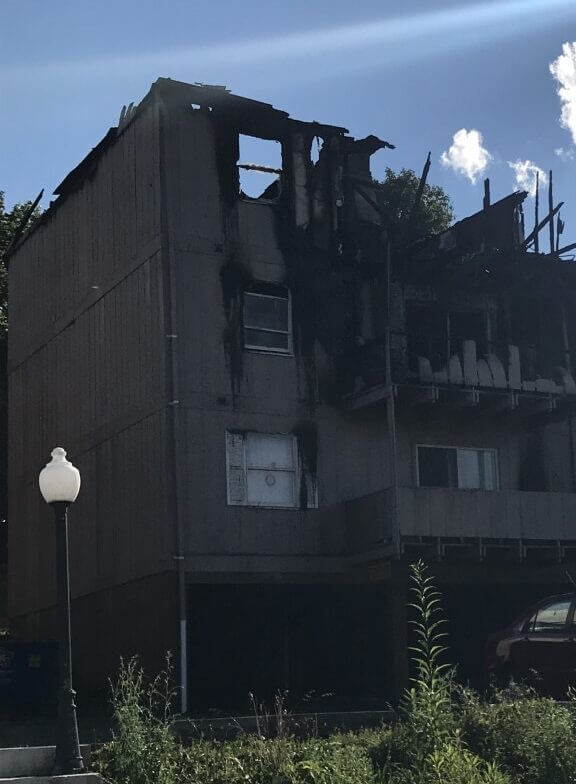 MORGANTOWN, W.Va. — The state Fire Marshal’s Office will be part of an investigation into a fire that destroyed four apartments just outside of Morgantown Sunday afternoon.

The fire in Building A at Bon Vista Apartments was called in at about 1 p.m.

Fire crews from Star City and Westover we’re among the first on the scene at the apartment complex on Stewartstown Road on the outskirts of Morgantown. When firefighters arrived, they saw Building A engulfed in flames.

“When we arrived, we had two apartments lit off, they were fully involved,” said Westover Volunteer Fire Department Assistant Fire Chief Bradley Wilson, who was among the first on scene. “Stairwell was fully involved and it was already breaking through the roof when we got here.”

While the fire did extensive damage to the property, only one resident was evacuated out of the complex, that was with assistance from neighbors before first responders arrived.

“No injuries reported, everybody had gotten out,” said Wilson. “One gentleman was carried out by a citizen who lived in the apartment complex, before we got here.”

The West Virginia State Fire Marshal’s Office will conduct an investigation into the fire due to the severe damage caused from it. A total damage estimate will also be taken by the fire marshal which is expected to be significant based on what was seen from first responders on the scene.

“Due to the amount of loss, the Fire Marshal’s Office has contacted us,” said Star City Fire Chief Justin Knotts. “It’s a standard procedure due to the fact there is so much property value lost.”