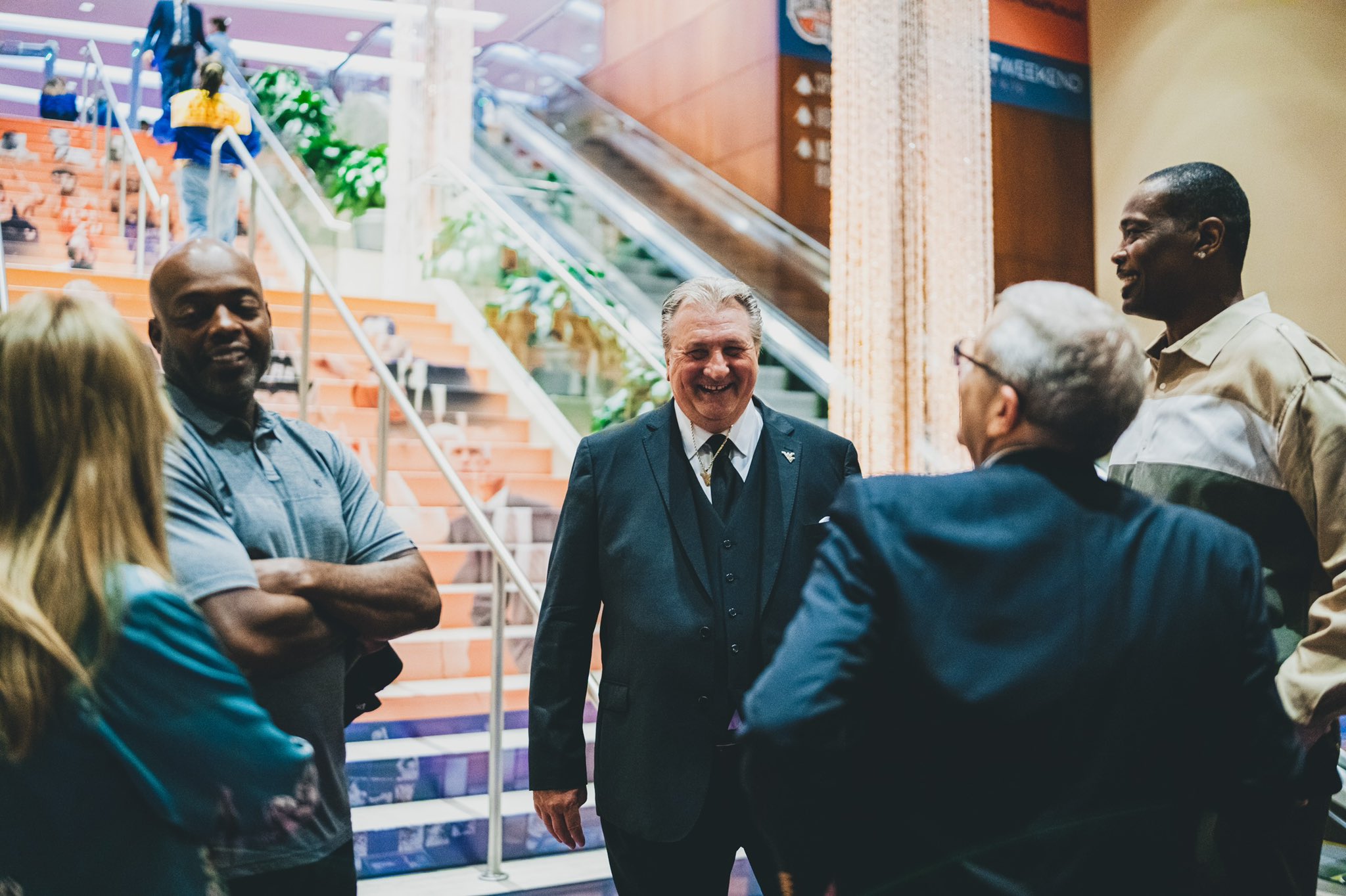 The journey began 45 years ago for the Morgantown native, and since then, he’s accumulated 916 career wins at five different schools as a head coach.

Huggins’ longevity isn’t exactly common. Nearly thirty-six percent of his career victories (326) have been won at WVU, Huggins’ alma mater. His 326 career wins at West Virginia are only 72 fewer than he compiled at Cincinnati, where Huggins was 398-128 overall.

“I have been fortunate,” Huggins said during Friday’s Hall of Fame ceremonies at Mohegan Sun. “My first head coaching job was at Walsh University, and I went around and got everyone that didn’t like where they were and brought them in, including Ricky Williams, the player of the year in our league. Those guys tend to help you.”

Yet fortune hasn’t always been on Huggins’ side.

Kenyon Martin, an All-American player for Huggins at Cincinnati, almost always comes up when the veteran coach talks about the better players he has been able to work with. Martin was the 2000 Conference USA Player of the Year and the first pick in the NBA Draft that year.

Martin suffered a broken leg during the conference tournament in his final season with the Bearcats, all but ending legitimate hopes for UC to win a national championship.

“I had the best player in the country in Kenyon Martin. We were unquestionably going to win the national championship, but a guy rolled into him in the conference tournament,” Huggins said. “He didn’t play the rest of the year. He went on to have a great pro career. When Ken went down, you could see all the air taken out of everything.”

Da’Sean Butler, WVU’s third all-time leading scorer, is considered one of the top players Huggins has coached and perhaps his most accomplished in his West Virginia tenure.

During Butler’s best collegiate season in 2010, the Mountaineers won the Big East Tournament, and as a No. 2 seed in the NCAA Tournament, advanced to the Final Four.

Butler tore his ACL during a national semifinal loss to Duke, which greatly diminished his chances of then making it at the next level.

“We were in the Final Four against Duke, and Da’Sean Butler was coming off a Big East Tournament where he hit four consecutive last-second shots, then he went down,” Huggins recalled. “He hasn’t played since then. The [New York] Knicks brought him into their administration, and he will do well.”

College athletics has gone through major changes of late, and Huggins had voiced his thoughts on name, image and likeness and the ever-popular transfer portal numerous times. On Friday, Huggins was asked what message he would give to newer coaches.

“Get ready for change. We don’t have as much influence and say as much as we need to have,” Huggins stated. “We have guys in the NCAA office who come up with rules and drop them on us and say that is what we are going to do. That isn’t easy. It isn’t easy when you are trying to build a team, and you are trying to get your guys to go in the direction you think then.

“I don’t think it is fair to the program guys. It may help some guys coming in, but it is not helping the guys in the programs that have been there and busted their tails for a considerable time to get to where they are.”

“I have always idolized Jerry probably as much as most guys in West Virginia,” Huggins said.

Huggins’ personality and demeanor have always been a staple of his coaching prowess. He often credits his father, accomplished Ohio high school coach Charlie Huggins, for providing useful advice. There were other coaches who did the same.

“I can stand up here and take credit, but the reality is that I didn’t have a choice,” Huggins noted. “I have been blessed to be around great coaches. Whenever I had an issue or didn’t know what to do, I had three or four people I could call, and you all would call them Hall of Famers.”