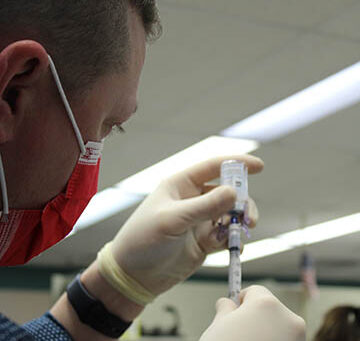 There were no amendments offered during Thursday’s floor session on the bill that has created concern among the medical and business community.

The bill, HB 335, would put language into state law that would require employers, including state government and private businesses, who mandate vaccination against COVID-19, to also offer religious and medical exemptions.

Gov. Jim Justice has said the bill is simply to clarify what is already “the law of the land” but West Virginia Chamber of Commerce President Steve Roberts and others disagree.

During an appearance Thursday on MetroNews “Talkline”, Roberts said passage of the bill would hurt the state’s business climate.

HB 335 is on the second reading. This bill could require employees to get the COVID-19 vaccine unless that person presents documentation noting medical condition or religious belief. Jim Kaufman, @WVHospitals, and Steve Roberts, @WVaChamber, join @HoppyKercheval. pic.twitter.com/FajkX4XqkE

The bill would require “covered employers” to accept exemptions through a certification process. A medical exemption could be obtained by an employee from a licensed medical doctor or licensed advanced practice registered nurse who certifies the employee could be medically harmed by a COVID-19 vaccination or has developed COVID-19 antibodies from a prior exposure to the virus.

A religious exemption could be obtained by getting a notarized certification, according to the language of the bill.

Roberts said the bill leaves too much to interpret.

“Our interpretation of this bill is that an employee says, ‘Well, it’s against by religion’ or ‘Well, I’ve got health reasons and I don’t want to do it,’ there’s essentially no further action that can be taken,” Roberts said.

The West Virginia Hospital Association has also come out against the bill. Jim Kaufman, WVHA president and CEO, said on “Talkline” Thursday that Gov. Justice may believe the bill clarifies exemptions but it would do something totally different.

“The intent may one thing but the way the bill is drafted radically changes the existing practices and policies,” Kaufman said.

Justice said Wednesday he’s against mandating businesses to require vaccinations but if they do they need to follow the law.

“All I am trying to say here is our private businesses absolutely need to comply with the law,” he said.

Kaufman said a new state law would add to what hospitals are already facing when it comes to mandates.

“We have existing federal policies that we are already following then we have this bill that would create a different state process. Then we have new federal regulations coming out from the (federal) Department of Labor for those with more than 100 employees,” Kaufman said.

Kaufman hospitals have had policies for years for how to handle vaccination requirements for workers.

Roberts said the bottom line is the bill is being described as something that it really isn’t.

Republican leadership in the House tried to move the bill to third reading a day ahead of schedule during Thursday’s floor session but did not get the required. Third reading, passage, is now scheduled for Friday’s floor session. The bill would then move to the Senate for consideration.