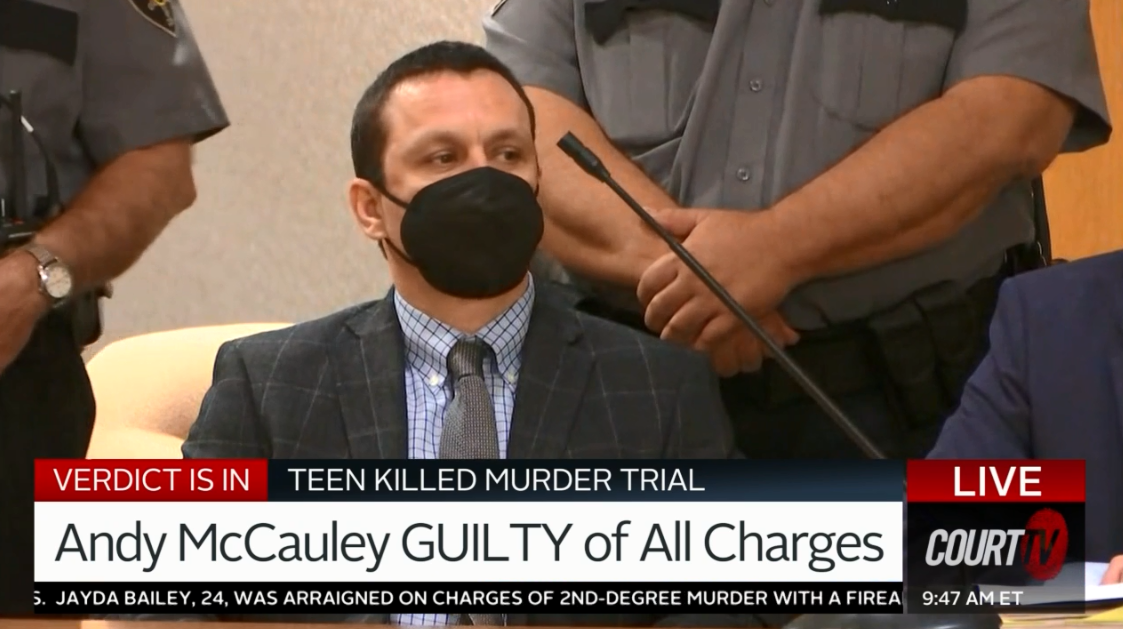 BERKELEY SPRINGS, W.Va. — Just like he did at his trial last month, convicted murderer Andy McCauley chose not to speak Thursday when he was sentenced for killing Berkeley Springs teenager Riley Crossman in 2019.

McCauley, 43, was convicted on the charge of first degree murder with no mercy. He was sentenced to life in prison with no chance for parole for murdering the 15-year-old Crossman.

Panhandle News Network reporter Marsha Chwalik, who was in the courtroom Thursday, said Circuit Judge Debra McLaughlin told McCauley that his silence has left many to speculate what happened on that May night in 2019.

“She said that it defies logic and there are some acts that are just heinous and this characterizes that,” Chwalik said.

McCauley, who was also convicted of concealment of a body and death of a child by a custodian by child abuse. dumped Crossman’s body over an embankment in Berkeley County a little more than a week after she was reported missing.

The trial lasted just over a week and involved 239 pieces of evidence and testimony from about 3 dozen people, including Crossman’s family members, friends, DNA experts, doctors, law enforcement and others.

Crossman’s mother Chantel Oakley, who was in a relationship with McCauley at the time of her daughter’s death, also testified Thursday.

“She said there is no punishment that works for her and she hopes he never sees the light of day,” Chwalik said.

Both Judge McLaughlin and Morgan County Prosecutor Dan James made it a point during the sentencing hearing to say Oakley had no part in her daughter’s death.

“Dan James said this is the most exhaustive amount of evidence he’s ever been part of during the case and none of it points to Chantel Oakley, all of it points to Andy McCauley acting on his own,” Chwalik said.

James said McCauley went into Crossman’s bedroom and suffocated her with a pillow that contained DNA evidence of Crossman’s blood and saliva. He told the jury McCauley knew exactly where the victim’s body was even as they searched frantically for her and held out hope that she would come home.

Testimony Thursday, which was not used during the trial, indicated a possible motive.

“Andy McCauley’s children’s mother as well as Chantel Oakley had brought up the idea that perhaps (McCauley) had gone into Riley Crossman’s bedroom with the idea to sexually assault her,” Chwalik said.

There was a concern by those who knew McCauley that he had a predisposition to be sexually aggressive when under the influence of drugs.

Crossman would have been a senior this year at Berkeley Springs High School. Chwalik said the community is still searching for closure.

“The community is still in a lot of pain but this gives them a chance to move on. The only regret the I heard today from Prosecutor Dan James is he believes this would have been a prime candidate for the death penalty if West Virginia had that,” Chwalik said.

James said McCauley went into Crossman’s bedroom and suffocated her with a pillow that contained DNA evidence of Crossman’s blood and saliva. He told the jury McCauley knew exactly where the victim’s body was even as they searched frantically for her and held out hope that she would come home. The search for the teenager had been going on for just over a week when her body was found in neighboring Berkeley County.

Due to the state of decomposition of the remains, expert witnesses could point to homicide as the manner of the child’s death, but could not rule a definitive cause of death. The defense argued unsuccessfully that without a cause of death, McCauley shouldn’t be held liable for that count.

One of the more chilling pieces of evidence the jury was shown involved screenshots of messages from the victim to her boyfriend on the night before she was reported missing. They indicated McCauley was in her room and that she was scared.

The prosecution showed the jury evidence of roofing screws from a Pennsylvania manufacturer that were being used on a project McCauley was working on. Those screws were found on the road uphill from where the body was found as well as under the seat of a work truck McCauley was driving May 8th. That’s the day prosecutors developed a timeline of McCauley abruptly leaving his work site driving that truck and making a route they say he used to go back to the house in Berkeley Springs to retrieve the victim’s body then over the back roads into Berkeley County where they say he discarded the remains over an embankment in Berkeley Springs.

Drywall mud that was reported to have spilled out in the back of the truck was also believed to have been located on parts of the victim’s body as well as on leaves near where her remains were found.