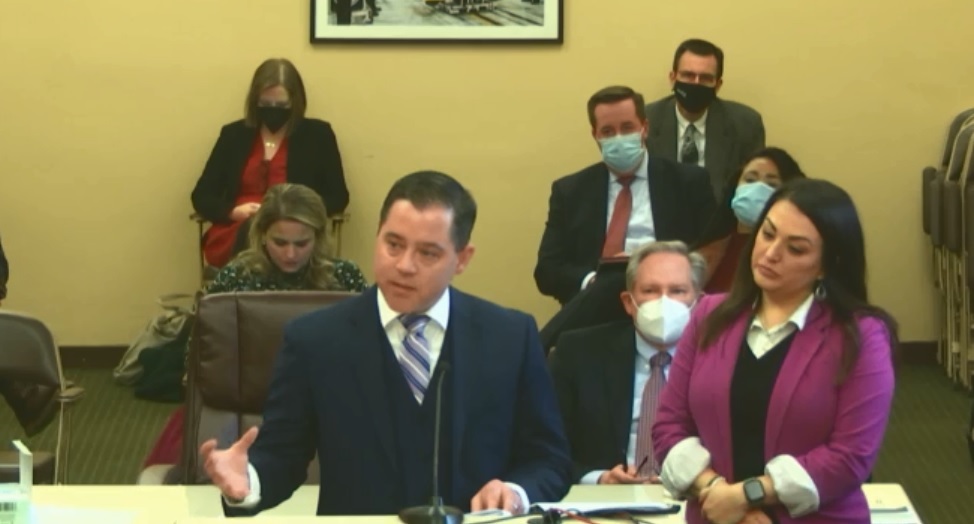 Craig and Beth Bowden testified before the Senate Education Committee in January.

Craig and Beth Bowden appeared before the Senate Education Committee Thursday afternoon in support of SB 261 which would update a bill originally passed by lawmakers in 2019.

The Bowden’s son, Trenton, 9, was abused at Holz Elementary in Charleston last September. His teacher at the time, Nancy Boggs, 66, was indicted by a Kanawha County grand jury on 23 counts of battery and one count of verbal abuse of a noncommunicative child.

His parents told lawmakers the video of one day showed their son and two other children being slapped across the face, having their heads slammed on desks, some students were thrown to the floor and one student was forced to eat lunch on the bathroom floor.

The bill, amended and passed by the committee Thursday, includes language that calls for more frequent viewing of the classroom video.

“That’s very important,” Craig Bowden told committee members. “That opens up the door for it to actually be a tool to detect this abuse.”

The language, including in an amendment from Sen. Amy Grady, R-Mason, says a school administrator is to review the video for no less than 15 minutes, no less than every 90 days.

Trenton Bowden was unable to tell his parents what happened in the classroom, Beth Bowden told committee members.

“We have to be able to provide them a voice in their schools,” she said. “They cannot provide a voice for themselves and without monitoring these recordings this abuse will continue to happen. We’re seeing it.”

Craig Bowden said the goal should be to quickly stop the abuse.

Another approved amendment would require video to be kept for up to a year.

The bill now heads to the full Senate for consideration.

Boggs resigned her teaching position Nov. 1, 2021. She is scheduled to stand trial in April.