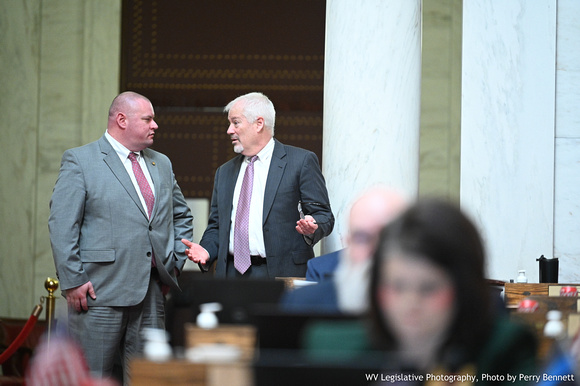 When delegates were discussing whether to embrace a $4.65 billion general revenue budget along with another possible billion dollars in surplus spending, one aspect of their focus was whether the governor would accept a House priority: setting aside $265 million as savings to prepare for income tax reductions down the line.

“The House took the position that we wanted tax reductions. So we, in the general revenue surplus section, put in $265 million for future tax reductions,” House Finance Chairman Eric Householder, R-Berkeley, explained to fellow delegates on the final day of the legislative session.

Members of the House of Delegates wondered if Gov. Jim Justice might exercise his line item veto.

Householder acknowledged, as his fellow delegates questioned him, “Don’t get hung up on any of this because why? — the governor has line item veto. Could he veto out my $265 million? Yes. Could he veto out any other things we put in the general revenue surplus section? Yes.”

As it turns out, that’s exactly what the Governor’s Office announced late Friday afternoon.

The governor signed the budget bill but exercised his line item veto power on what the majority in the House of Delegates meant to set aside for future tax relief.

The governor objected that a specific House bill to trim the income tax had not passed, so there was no corresponding legislation for the budget. That bill, House Bill 4007, was never taken up by the Senate.

The governor’s letter elaborated that “it would set a bad precedent to set aside funds for a purpose that the Legislature rejected. It would also set a bad precedent to appropriate funds to a fund for which there is no stated purpose, doing nothing to accomplish the intended goal but making the funds unavailable for an entire year.”

Like the governor, Kelly Allen, executive director of the nonprofit West Virginia Center on Budget & Policy, questioned setting aside millions of dollars in public funds for a possible future tax cut. She said the money could be put to better use to bolster current needs.

“If we hold onto taxpayer funds for years in the hopes of future tax cuts for the wealthy rather than investing now in things like child care and higher education that can help all families and grow our economy, shame on us,” she said.

House Speaker Roger Hanshaw today said he understands the concern that much of the state’s millions of dollars in current revenue surplus was built on federal relief dollars. And there are restrictions on taking that federal money and turning it into tax cuts that might not be sustainable.

“One of the things that’s really frustrated this Legislature and probably the governor — although I don’t want to speak for him — is that the Congress of the United States has really tied the hands of all states in the country, not just West Virginia, with respect to what we’re able to do with tax relief and adjustment of tax structures because of the federal funds that have flowed into the state,” said Hanshaw, R-Clay.

One of the delegates who supported the preparation for a tax cut and also questioned the handling of a possible billion dollars in surplus was Marty Gearheart, a Republican from Mercer County. Gearheart spoke at length on the final day of the legislative session about his concerns.

Today, Gearheart said he is not surprised to see the governor wield the line-item veto.

“I think one could have anticipated this veto as the Houses (Marty’s idea ) of tax cuts and the governor’s differ,” Gearheart said in an email today, referring to a plan Justice promoted last year to sharply cut income tax rates with an offset of raising other taxes, including the sales tax.

Another delegate who wanted money to be set aside for a future tax cut was Delegate Mick Bates, R-Raleigh. He said the income tax cut has been a priority of the House majority and that the $265 million represented a down payment on that.

But the day the House passed the general revenue budget, Bates was among those who questioned whether that priority would get past the line-item veto.

“There were several of us who were skeptical of that, and it appears we had good reason to be skeptical,” he said in a telephone interview today. “The Legislature in theory has the power of the purse, but in reality we do not. I assume there will be some upset House members, including the Finance chairman.”

Bates said he understands the governor’s concern that the $265 million correlates to a bill that didn’t complete the legislative process. But he, in turn, questioned a different surplus spending item, $100 million directed to the governor’s contingency fund and intended as a match for congressional earmarks. Several delegates questioned what those earmarks are and what the match would be.

“This $100 million going into the earmark fund, that doesn’t exist either,” Bates said. “It’s not a real thing.”

Bates suggested the $265 million may be discussed again in a couple of months if it is proposed to be spent instead of saved. “I wouldn’t be surprised if that money isn’t taken up and spent on some other priority,” he said.

Over a couple of hours of debate over the budget on Day 60 of the legislative session, delegates discussed the possibility that the line-item veto would come into play. One of the delegates who asked a series of questions was Pat McGeehan, a Republican from Hancock County.

McGeehan said that’s a reach. “Wouldn’t you agree that’s not even reaching into left field; that’s reaching outside the stadium? We’ve tried that before, and when’s the last time we called ourselves into session?”

But Householder maintained it’s still possible for delegates to stand their ground in special session. “I think it makes perfect sense.”