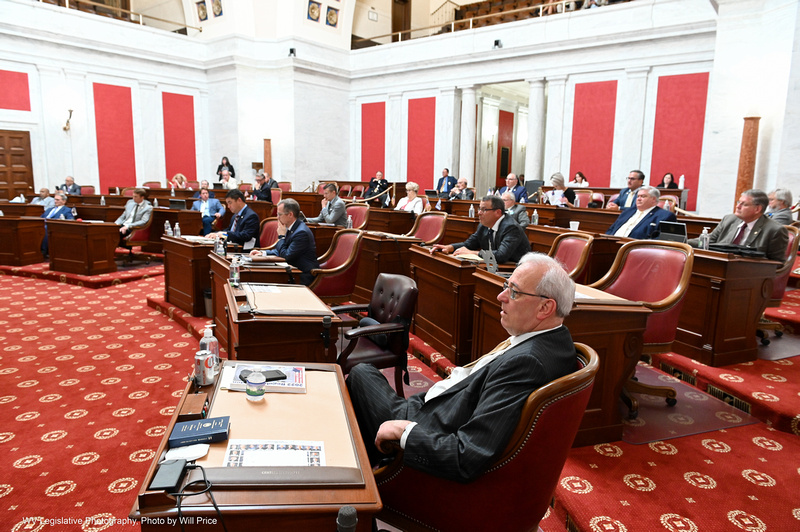 Senators participate in a special session at the state Capitol. (Will Price/West Virginia Legislative Photography)

West Virginia lawmakers moved an abortion bill to the brink of passage, but disagreements led both chambers to adjourn until some other time with no final resolution.

The House and Senate stayed well into Friday evening before adjourning to an undetermined later date. The evening ended with the House majority disagreeing with changes the Senate had made and calling for a conference committee to work out differences. Then they went home.

So after one week of disagreements, protests, anger and policy making, nothing is set.

Before everybody left Friday night, West Virginia senators passed a bill restricting abortion 21-10, with some members of the Republican majority voting for it even though they said it doesn’t go far enough. They hoped delegates would tighten it up.

“I’m going to vote yes to send this paper tiger back over to the House,” said Senator Eric Tarr, R-Putnam, who said the bill isn’t restrictive enough as passed.

Over a long Friday evening, senators made significant changes from what passed the House of Delegates earlier this week.

The biggest change resulted from an 18-13 vote to strip criminal penalties for medical providers out of the bill. If the bill passes in this final form, the state’s policies on abortion would be enforced through licensure.

The Senate also scaled back a time period that abortion would be permissible in cases of rape or incest to 8 weeks. The bill passed the House of Delegates allowed abortions within 14 weeks under those circumstances.

The Senate’s consideration of the bill ran well into Friday evening after Gov. Jim Justice unexpectedly added the issue to a special session call on Monday. Senate President Craig Blair, R-Berkeley, ordered the galleries to be cleared of spectators after several verbal outbursts.

Senators took what delegates passed earlier this week and amended a whole new bill into it. Senators then considered several amendments to that amendment.

Tarr and some other Republicans suggested the removal of criminal penalties weakened the bill. Republicans who took that position said they already had reluctantly accepted some exceptions for rape and incest because that would increase the chances of passage overall.

“This is not a pro-life bill; this is a pro-abortion bill,” said Senator Robert Karnes, R-Randolph, blaming some of his party colleagues who had pushed to loosen its policies. “This was done by this party.”

Karnes said delegates might come back with something more restrictive “but if they do, it won’t pass this body.”

Other members of the Republican majority who indicated dissatisfaction over the changes also said they hoped delegates would make it more restrictive.

“If I decide to vote for this legislation it is with the hope that the other side (delegates) will be able to improve upon it,” said Senator Patricia Rucker, R-Jefferson, who wound up voting against it.

After the U.S. Supreme Court reversed the landmark Roe vs. Wade federal guarantee of abortion and sent policy decisions back to states, West Virginia lawmakers took up the abortion bill in a special session this week.

West Virginia had a criminal abortion law dating back to the 1800s that had been unenforced following Roe vs. Wade — along with newer abortion regulations that had assumed the procedure was restricted but legal.

A court battle has already begun over whether those abortion laws conflict so much that they can’t be reconciled.

The bill taken up by the Senate does not allow for abortion at any time during pregnancy, except for in some limited circumstances. In recent years, West Virginia law had allowed abortion up to 20 weeks of gestation.

As Senate Judiciary Chairman Charles Trump, R-Morgan, explained the Senate’s version titled the “Unborn Child Protect Act,” he said “it tries to say that the new law, the new article would supersede all those old acts.”

West Virginia’s law from the 1800s punished abortion with three to 10 years imprisonment, and the House bill had retained that for medical providers.

The Senate bill makes abortion subject to licensure revocation for medical providers following an amendment by Senate Majority Leader Tom Takubo, R-Kanawha. Takubo, a doctor, worried that the threat of incarceration would chill the work of obstetrician-gynecologists in West Virginia.

Now, Takubo said, “They’ll lose their license, and that is an extremely large consequence.”

The bill allows exceptions for a nonmedically viable fetus, an ectopic pregnancy, which is when a fertilized egg implants and grows outside the main cavity of the uterus, or a medical emergency, not including psychological or mental health situations.

There are exceptions in instances of rape or incest for adults within the first eight weeks of pregnancy if the abortion patient has reported the sexual assault to a law enforcement agency or obtained treatment from a licensed medical provider.

Those exceptions extend to 14 weeks for minors or incapacitated adults within the first 14 weeks of pregnancies resulting from sexual assault or incest. In those cases, the patient would have to report the assault to law enforcement or a government agency authorized to act on child abuse — or if the patient has obtained medical treatment for the assault from a licensed medical professional.

The bill specifies that several things are not considered abortion: a miscarriage, stillbirth, use of established cell lines or human fetal tissue research, in vitro fertilization or contraceptives.

Most Democrats argued against passing the bill and its restrictions.

“I think we have to understand that this (bill) is no abortion for poor women,” said Senator Hannah Geffert, D-Berkeley. “Poor women in the state are not going to have a choice because they can’t afford to go anywhere else.”