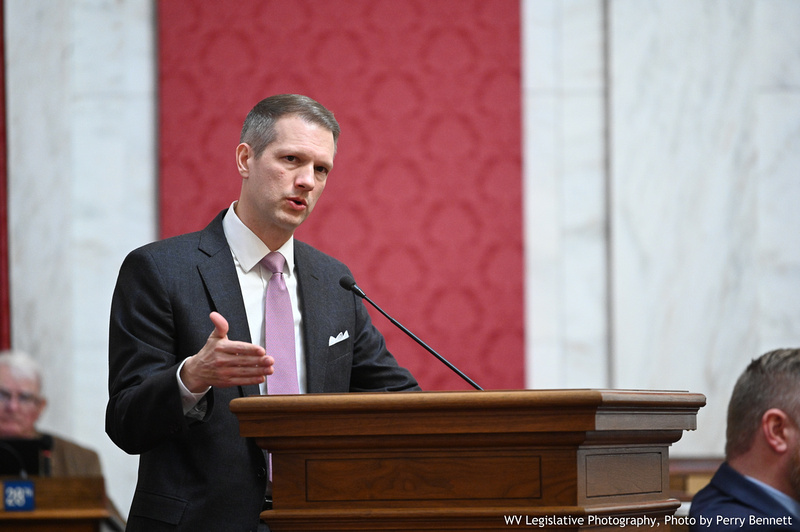 Moore, saying he’s an “America First conservative,” was planning an announcement with supporters at noon.

“I am proud and excited to announce today I’m running to be the next member of Congress from the 2nd Congressional District from the state of West Virginia,” he said on Talkline. “I think we need fighters in Congress.”

BREAKING! @RileyMooreWV announces his candidacy for the Republican nomination for Congress in the 2nd District. Why does Riley want to run for this position? He joins @HoppyKercheval. WATCH: https://t.co/yCFQ3nEhk6 pic.twitter.com/3dx7a6fLdc

Moore, whose home is Harpers Ferry in Jefferson County, is a former state delegate from a prominent political family and a work history in Washington D.C. He is the nephew of current U.S. Senator Shelley Moore Capito, R-W.Va., and grandson of three-time Gov. Arch Moore, also a Republican.

His announcement came just a little more than a week after the newly-elected congressman in the sweeping district, Alex Mooney, announced he would run for U.S. Senate in 2024.

Mooney waited just a week after the General Election to announce his challenge to U.S. Senator Joe Manchin, a Democrat. Mooney has already started asking for campaign donations.

Earlier this year, Mooney defeated fellow incumbent Congressman David McKinley, also a Republican, in a battle over a combined new district. Mooney then defeated Democrat Barry Wendell, a former Morgantown councilman, in the General Election, way back on Nov. 8.

The electoral turf, District 2, is a swath of the northern counties of the state and was established when West Virginia lost a congressional seat as a result of population loss.

.@RileyMooreWV continues to discuss his candidacy for the Republican nomination for Congress in the 2nd District. He joins @HoppyKercheval. WATCH: https://t.co/yCFQ3nm85Y pic.twitter.com/vAMMupeVBO

His office has been in the public eye in West Virginia from overseeing programs like the Hope Scholarship for students leaving the public education system, but Moore also has made frequent appearances on national political programs by taking on giant, national financial companies over how their investment practices relate to climate policies.

He was elected to the state’s House of Delegates in 2016 to a district that includes portions of Jefferson County, including Shepherdstown and Harpers Ferry. Moore was defeated after one term by Democrat John Doyle, a longtime delegate.

Prior to serving in elected office, Moore worked as a national security staffer for the U.S. House of Representatives Committee on Foreign Affairs, as a contract employee for the U.S. Department of Homeland Security, and as an employee of the defense and aerospace firm Textron Inc.

He has a bachelors’ degree from George Mason University and a master’s degree in strategic security studies from the National Defense University.

The recent announcements by Moore and Mooney are likely the first in a bunch to drop ahead of 2024.

Attorney General Patrick Morrisey, a Republican, last week distributed a six-page letter in which he described openness to governor, Senate or Congress while urging people to “hold off pledging your support to any other candidate who may be making noise about one of the key races up in 2024.”