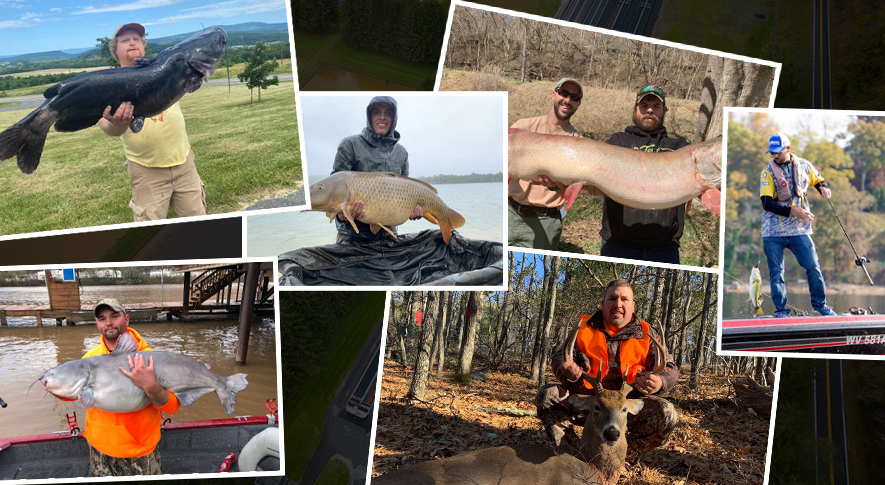 CHARLESTON, W.Va. — As 2022 winds to a close, a glance back at some of the top outdoors stories for the year showed it was definitely a good year for hunting and fishing in the Mountain State.

There were five record fish caught in 2022 among four species. The first came in March when Lucas King of Burnsville caught the new state record musky. He was killing time before running a few errands when he hooked the giant fish in the Burnsville tailwaters. After the catch, he was able to get hold of DNR personnel to have the fish officially certified and returned it to the water.

During April, Cody Carver of Dry Branch caught a new state record blue catfish on the Kanawha River near Marmet. His fish broke the record for weight. However, Carver never got a chance to have his name etched into the record books. The record was broken less than a month later by Ohio angler Stephen Price while fishing downstream from the Winfield Lock and Dam on the Kanawha River.

The blue catfish wasn’t the only catfish record to fall, a Virginia angler on a hot summer night wasn’t having much luck fishing after work at South Mill Creek Lake in Hardy County. However, just as Allen Burkett of Broadway, Va. was about to call it a night, he hooked into the new state record channel catfish.

The final record to fall in 2022 came during a driving rainstorm on Summersville Lake. Ayden Minick of Mt. Pleasant, Pennsylvania was in town to fish in a carp fishing social event with a carp fishing club. Despite the weather, he managed to land the biggest common carp in state history. Again, the fish was certified at the lake and released back into the waters of Summersville Lake.

“It’s pretty amazing. It’s been a good year for anglers in terms of setting records and it’s been pretty exciting,” said Paul Johansen Chief of Wildlife for the West Virginia Division of Natural Resources.

Along with angling success, deer hunters saw improved success in 2022. The buck season harvest was up significantly from the previous year. The DNR reported hunters harvested 49,662 bucks, which was an 18 percent jump from 2021.

“It’s always important to take a look at that overall buck harvest. That seems to be a key factor that sportsmen and women focus in on. We were just shy of 50,000 bucks. We were very pleased with that and we received a lot of comments from hunters who commented on the number of bucks they saw and they saw a number of nice ones,” Johansen said.

During 2022, for only the fourth time in history, a West Virginia angler qualified to fish competitive fishing’s biggest event. Will Dieffenbauch of Morgantown earned a spot in the 2023 Bassmaster Classic.  Will finished second in the B.A.S.S. National Championship, but feels certain he could have won it had he not struggled with boat problems on the final day of the tournament. He’ll compete on the water’s of the Tennessee River and Fort Loudon Lake in Knoxville, Tennessee in 2023.

The year also saw four fishermen finish up the DNR’s new Master Anglers program. The first to complete the challenge which includes catching one of multiple species was Zack Adkins of Cabins, W.Va.  Adkins’ fishing buddy Jonathan Paine of Elkins completed the program a few weeks later. Two other fishermen, Alex Foster and Jesse Truman, both of Charleston, also completed the challenge.

Finally, and possibly most significantly for sportsmen in West Virginia, 2022 saw completion of work on the Bowden Fish Hatchery in Randolph County. The DNR finished a multi-million dollar upgrade, renovation, and expansion of the old facility. It’s a significant milestone which trout anglers will notice in the years ahead.

“We’re expecting to see trout hatchery production expand by close to 100 thousand pounds annually. That’s a really big deal. Bowden is a very important facility and to complete those renovations is a major accomplishment,” said Johansen.

With the Bowden project done, the focus for the trout program will shift to similar upgrades and renovations at the state’s other hatchery facilities.